Many IFMR members had put in a lot of effort preparing for the RI World Convention. Amongst the many invitations that had been sent out to IFMR members and DGs, was a number of letters addressed to the World President of Rotary International, Cliff Dochterman, inviting him to join IFMR members on a ride whilst he was in Melbourne. With the busy schedule of a World President, you would hardly expect a personal response, however the IFMR Secretary had worked through the correct channels, and whilst the responses were non-committal, there seemed to be a thread of hope that it may happen. Cliff's well known bubbly personality gave the Australian organisers some confidence that it might all come together.

David Ingerson and Tony Moyle rode to the convention (750kms), David on his brand new BMW K1100LT and Tony on his well-travelled BMW K100RT. Prior to their departure, a mountain of printed material, apparel and other paraphernalia had been sent across to the hard working Melbourne Rotacyclists, who had set up the IFMR Fellowship Booth in the House of Friendship in the Tennis Centre.

When David and Tony arrived at the Tennis Centre, there was a quite a group Rotacyclists waiting on the steps for them. Now, for the first time, faces could be put to the many names of the people who had been phoning and faxing each other regarding the progress of the Booth, the Ride and the Dinner! Without being biased, it is fair to say that the display at IFMR Booth was amongst the best there, and the two Triumph motorcycles on display were real crowd drawers. 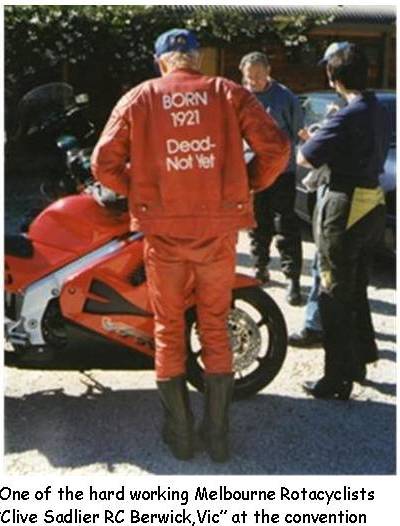 The booth was manned by IFMR members (a number of them from overseas) for the entire duration of the Convention, and many new members were signed up - quite a number from other countries, and lots of District Governors took IFMR promotional material back to their Districts.

Being optimists, the organisers had made contact with the Melbourne police and asked if they could provide a police escort for the planned ride with the World President. Since the Convention was being held in two main venues (the Tennis Centre and the Convention Centre) and the organisers had obtained the World President's agenda, the plan was, hopefully, to transport him from one venue to the other. To this end, the Melbourne IFMR members had arranged for two motorcycles fitted with sidecars, to be on standby. There were quite a few members who said they wanted to ride with the World President if it happened, and each had given details so they could be contacted at short notice - remember, this was all before the advent of mobile phones!

Early on the second day of the Convention, David and Tony were to be found outside the doors of a Melbourne theatre! Inside were hundreds of Rotarians being addressed by the World President! By the laughter, they were really enjoying his delivery! Not quite so easy outside for David and Tony, as they were trying to convince the World President's minders that they should talk to their master. Persistence eventually paid off, and Cliff, followed by a couple more minders, bounced out the door!

He had obviously read the IFMR letters of invitation, knew what it was all about, and he was quite quick to agree to a ride. David’s question was when? World President Cliff’s answer -this afternoon!
This short notice was going to put all of the IFMR’s plans to the test.

A phone call to one of the Melbourne members, and the task of ringing the local riders was covered. The police had been pre-warned that there may be little notice, and when phoned they said they would have two motorcycle officers at the entrance to the Convention Centre prior to 1pm.

The next thing to do was to visit the Convention Centre, and sort out with the local Rotarians who were controlling traffic, how this was going to work. The security staff also had to be told what was going to happen. About 10am, David and Tony rode up the spiral drive into the Convention Centre. The drive is just wide enough for two vehicles to pass, and when they reached to top (the point at which Cliff would be picked up), it was mayhem!

The local Rotarian in charge of traffic control was almost at the point total frustration! It took ten minutes to tell him of the plans. The reason it took so long was because he was constantly rushing off to sort out some crisis or anther! When he finally processed what had been said, he replied that it could not work, as it would be impossible to get a group of bikes up there, due to the chaotic traffic! Tony said “We will see you at 1.30pm”.

Then there was a wait! How many would turn up?

By 12.30, most of the 23 riders, including the two sidecars, had assembled at the entrance to the Convention Centre, along with the two motorcycle police, plus a police car!

At about 1pm, the plan swung into action! The police car parked across the entrance and only let in traffic that was vital. All this was unknown to the overworked Rotarian at the top on traffic control, and he was amazed, but much more relaxed, when the IFMR rode in as a group at 1.30pm as planned! 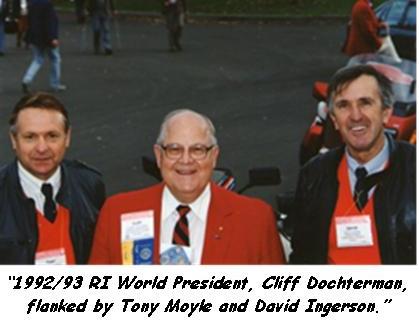 The meeting that Cliff was addressing in the Convention Centre, went a little over time, but he soon emerged from the function, laughing as usual, and with some effort squeezed himself into the nearest sidecar. The second sidecar was offered to one of his minders, but none of them were smiling - it appeared that they had not been told of this little adventure!

Some lucky Japanese exchange student got to ride in the other sidecar!

The minders were quick to jump into the two black Mercedes, and drop in behind the bikes, but when the motorcycles got to the bottom of the Convention Centre the two motorcycle cops lead the cavalcade, and the police car bought up the rear. The two black Mercedes were left to fight their way through the busy Melbourne traffic as best they could!

The trip to the Tennis Centre took about 20 minutes. Cliff had declined the offer to wear a helmet, and he had an absolute ball waving to the crowds that were on the street, all perplexed by the escorted group of bikers passing by. 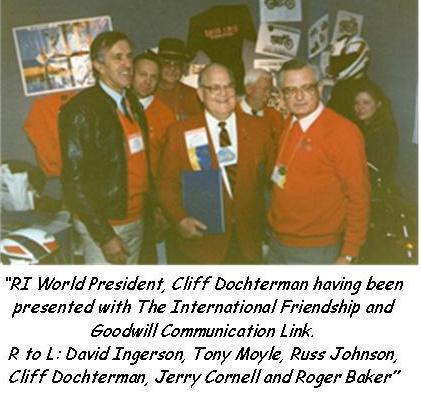 Word had got out of what was happening, and there was a welcoming crowd at the entrance to the Tennis Centre. They were all highly amused at the effort it took to extract Cliff from the sidecar. The sidecar seating was of quite generous proportions, but Cliff was of even MORE 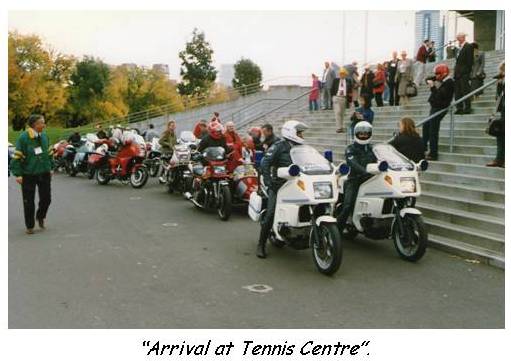 generously proportioned! Cliff in his usual way was laughing and thanking the sidecar rider, but his laughter turned to astonishment when the ride removed HER helmet. Cliff was quickly whisked off to the IFMR Booth, where he was happy to chat and have his photo taken will all and sundry.

It was a wonderful informal 20 minutes before the men from the black Mercedes came to claim their man!

Click on right hand photo or here to go to
The International Friendship and Goodwill Communication Link.