It all started with the upcoming long weekend in October in South Australia, and a suggestion from Port Pirie Rotacyclist Bryant Chivell that this would be a good opportunity for a ride to Woomera. Bryant had spent much of his youth in the Woomera area and had an extensive knowledge of its history, particularly related to the atomic and rocket tests.

The idea created some interest and as some of the Ballarat members had been looking for an opportunity for a longer ride the three-day weekend was extended to 5 days and a round trip of approximately 2500 km. Day one, Friday, would be approximately 600 km to Loxton then a similar distance on Saturday to Woomera. The idea spread, resulting in seven riders from Victoria, three from Ballarat, two from Horsham, one from Portland, and one from Phillip Island. There was also one from Lockhart in New South Wales.

10 riders left from Loxton on Saturday morning, travelled to Burra to meet other riders from South Australia, and after a short stop journeyed on through the Claire Valley to the Stuart Highway and north to a lunch stop at Port Augusta. The monotony of the remaining 180 km to the Woomera township was thankfully broken by several stops where Bryant pointed out the points of geographical and historical interest. 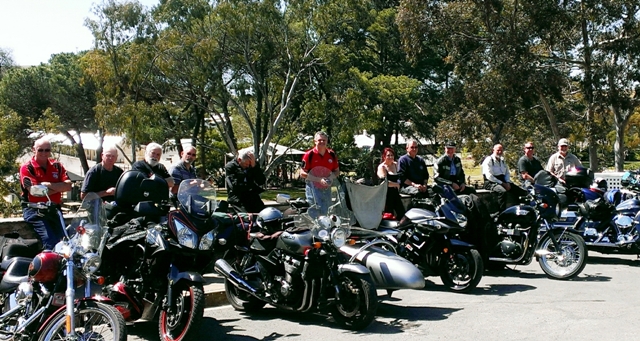 Friday's conditions had commenced with freezing weather in the south but gradually heating up as we journeyed north we shed our heavy jackets, eventually replacing them with flow-through summer jackets with very little underneath as the temperature climbed to the 30s. A further challenge was the constant headwinds, some of the Southerners finding these conditions very difficult.

A psychological difficulty faced by the riders from the south was the obvious failure of vast areas of crops in the Wimmera and the Mallee, the very dry conditions between the Riverland and Burra, and the extremes of the country surrounding the Stewart Highway. The contrast of the lush conditions and very successful crops in the Clare Valley lifted our spirits.

Woomera itself is isolated and surrounded by desert and although it has a small population the township has the potential to house perhaps 2000 residents and being owned by the Commonwealth is very well maintained apparently in constant readiness for re-population. It has public facilities which would be the envy of many small towns including two excellent museums relating to its history as an atomic and rocket testing facility.

On Sunday Bryant led us on a walking tour of the town explaining the many points of interest and giving us the benefit of his personal knowledge of the activities and history which considerably enhanced our appreciation of the area. After lunch he then led a 45 km ride out to lake Hart, a huge salt pan which was the base for all the testing.

Our return on Monday and Tuesday was a reversal of the first two days however  hopes for a following wind were dashed when it turned out to be an almost gale force battering crosswind for the whole of the journey. Unfortunately, like many of the Woomera rockets, Steve's Rocket failed to proceed past Port Augusta and we had to leave him in the very capable hands of the RAA and the RACV. We Southerners journeyed on and again were very thankful for the hospitality of Tony Moyle on Monday night.

To say that the ride was a challenge is probably understating the feelings of some of the riders but while I certainly won't be returning to Woomera, I look forward to the next long run with members of our Fellowship. It was just under 2500 km Buninyong to Buninyong and whilst we missed rain both in South Australia and back in Victoria, it was freezing in Buninyong and I was glad to be home.

Many thanks to Bryant and Tony for their organisation ........ Robin