The Formation of the IFMR 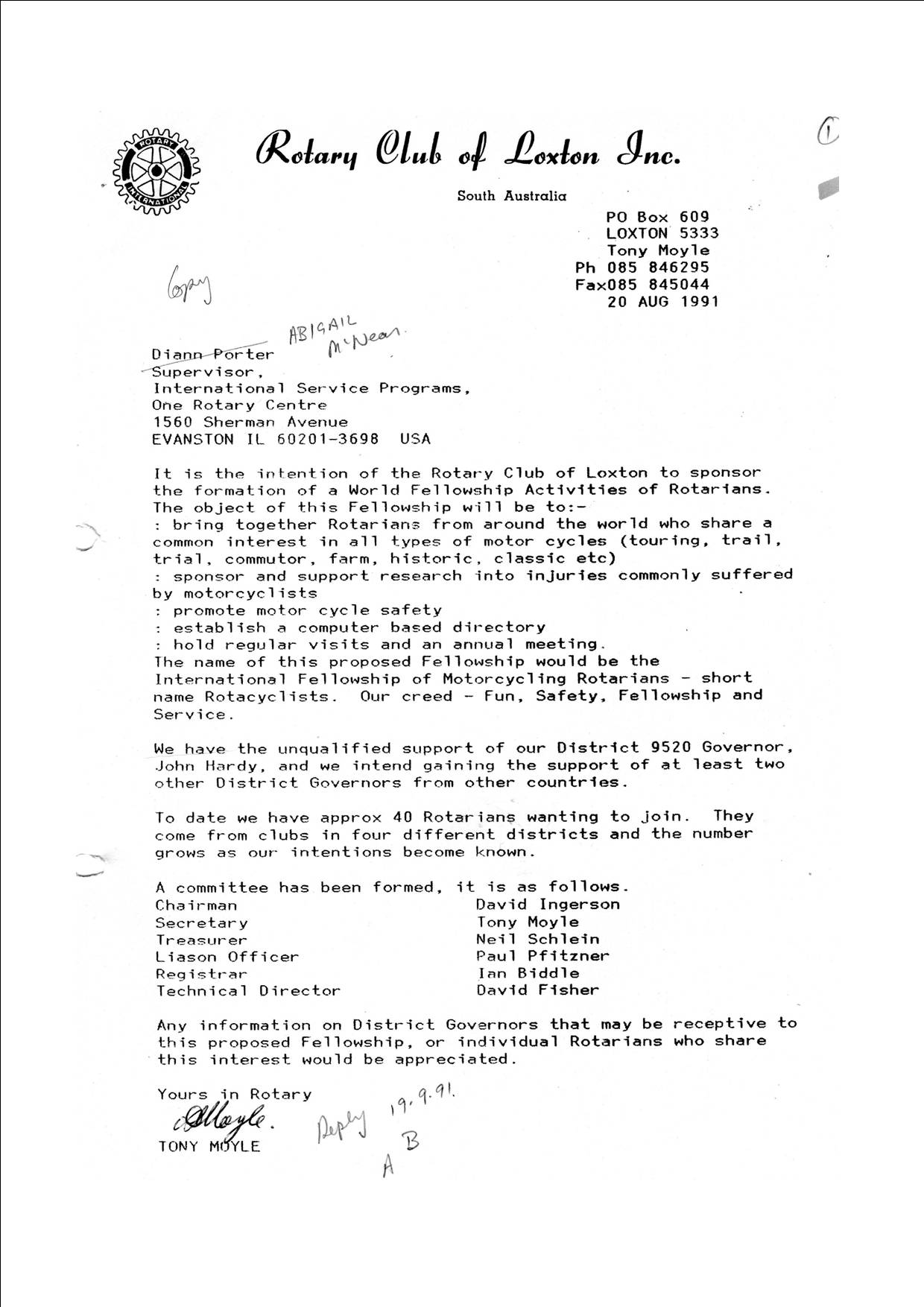 Unbeknown to the Loxton group, at the time of applying to Rotary International for official recognition (see application form),"Click here for enlarged copy of application form" there were at least two other Rotary groups who were also interested in forming a fellowship for Rotarians who rode motorcycles. A well organised Scandinavian group had been corresponding with RI for some time, and at least two North American groups were riding together as Rotarians.

At that time, to have Rotary International sanction a new Fellowship, a number of criteria had to be met. These included a list of potential members (in the case of the IFMR, over 80 Australians were listed), a Constitution, a Logo and sponsorship from three current District Governors, two of whom had to be from a country other than that of the sponsoring club.

John Harding, the 1991/2 DG for District 9520, was the first to sponsor the IFMR. District Governors in every city where motorcycles were manufactured were written to seeking their support.

Within 24 hours of receiving our letter, the DG of District 6270, Frederick Luedke, of Milwaukee, USA, faxed back his letter with “Excellent idea! Let us know how else can we assist! Rick Luedke” scrawled across it. The Loxton group had found their second DG!

However finding a third DG sponsor proved much harder.
Many letters were never answered, and one that was returned summed up what many DGs of that time must have been thinking.

It came from DG Fumio Tamamura, District 2580 in Japan.

Included in the letter sent to him was: “I have chosen to seek your support because Tokyo is part of your District. The Honda motorcycle is manufactured in that city and many Australians have strong links with that marque, having owned one, or follow the 500cc Motorcycle Grand Prix with Australian riders Wayne Gardner and Mike Dooan riding Hondas.”

It read in part: “In Japan, motorcycle riding is almost totally limited to the younger generation, and to be frank I do not believe that any Rotarian here would like to be seen on one. Especially in Tokyo, where street congestion is almost chronic the only ones seen here are those used for delivering packages and messages, and is far from a pleasurable hobby. Such being the case, I am afraid that it will not be possible for me to give you much encouragement about furthering your particular friendship activity in Tokyo.”

After some direct canvassing by the President of the Rotary Fellowship of Antique, Classic & Historic Automobiles, Brain N Henry, Andres L Guillen, the then District Governor of District 3450 (Hong Kong; Macau-Zone 4) willingly agreed to be our third sponsoring Governor.

This made the IFMR the second Rotary International Fellowship initiated in Australia.

Note that a copy of the letter from Rotary International to the Rotary Club of Loxton congratulating them on the formation of the International Fellowship of Motorcycling Rotarians, was sent to Ronald Lyster.
Ron gets a special mention in chapter “The First IFMR World President” and should also in the “The IFMR North American Chapter History” when it is written !