With the 1993 Rotary World Convention being held in Melbourne between May 23rd and 26th, there was much activity in the IFMR in Australia during that year.

As early as Xmas 92, personal contacts were made with Melbourne Rotacylists, and the seeds for manning a Fellowship Booth at the Convention, a motorcycle ride, and a Fellowship Dinner were sown. Thanks to the efforts of John White, a member of the Rotary Club of North Melbourne, the premises of the Victorian Automobile Club were secured as a venue for the IFMR Dinner.
John also took responsibility for the post Convention Ride, which he decided would be around the Mornington Peninsula.

Steve Chiodo, manager of Peter Stevens Motorcycles, Melbourne, went to a lot of trouble following up on high profile people associated with the motorcycle industry, as possible guest speakers for our Dinner.
Eventually he was able to secure the services of Peter Smith, better known as “Mr Smith” Editor of Streetbike magazine and a regular contributor to other Australian magazines such as Two Wheels.

The first International Newsletter, accompanied by an International Directory was posted out to 226 Members (or Potential Members) in 13 countries in February 1993.
The Newsletter Editor was one George Sinclair, Rotary Club of Adelaide Parks, and the contents included a Chairman’s Corner, the Fellowship Structure, an invitation to help man the Convention Booth, Ride and Dinner registration, coming events, contributions from Rotacyclists in U.S.A, and United Kingdom, plus a request to members in all of the countries to support “The International Friendship and Goodwill Link”.

The idea of this Goodwill Link was the brainchild of Mary Morris of Adelaide, our first female Rotacyclist. Rotacyclists were asked to approach leading politicians, dignitaries and notable citizens in their area, and have them send a message of peace and goodwill to the World President of Rotary, Cliff Dochterman.

The end result of this was a bound book containing 35 letters of welcome, goodwill and recognition of Rotary’s role in world peace and understanding from Australian State Premiers, Senators, the Ombudsman to the Lord Mayor of London.
Also listed in this book were the names of 74 Rotary Clubs in which Rotacyclists where members.
Almost 100 Rotarians had signed their names in this book which was presented to World President Cliff Dochterman in the House of Friendship when he visited the IFMR Booth! 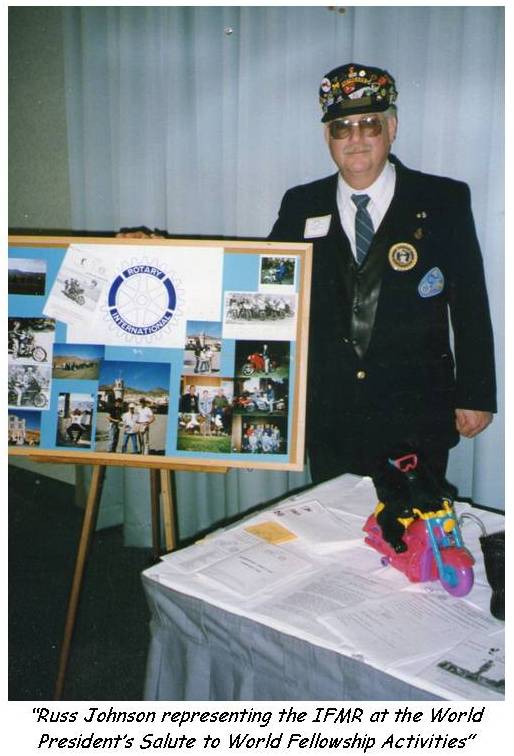 Preparing for the World Convention was not the only activity in the first half of 1993. On March 5th, IFMR member, Russell Johnson, Rotary Club of Newburyport, Massachusetts, U.S.A., armed with information and IFMR paraphernalia, sent to him from Australia, conducted a presentation at the World President’s Salute to World Fellowship Activities display and dinner.

Meanwhile a membership application form was received from Rtn David Lamb, Rotary Club of Devizes, Great Britain, and in his response to the package that was sent to him was a short line saying that he would join the IFMR on his return to the UK, as he was accompanying his wife Nina who was soon to lead a tour group to Australia.

You can imagine David’s surprise when the train pulled into Adelaide, and he was met by Newsletter Editor George Sinclair, and John Donaldson.
Adelaide was planned as a two day rest period for the group, and David has since stated in several articles that he has written, that what took place during those two days was the highlight of his trip! 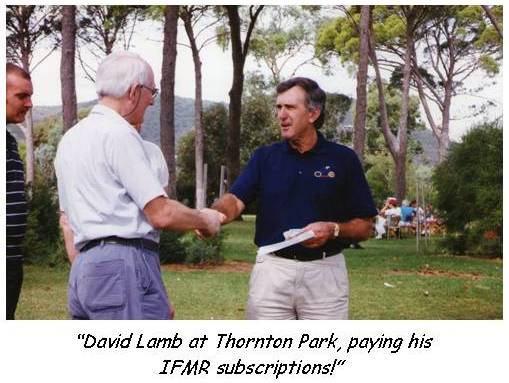 George and partner Carol took them out and showed them the town, and then on the second day they were taken to Thornton Park where about 20 Rotacyclists and quite a few members of the local Rotary Club had gathered for a BBQ lunch and a ride through the hills. 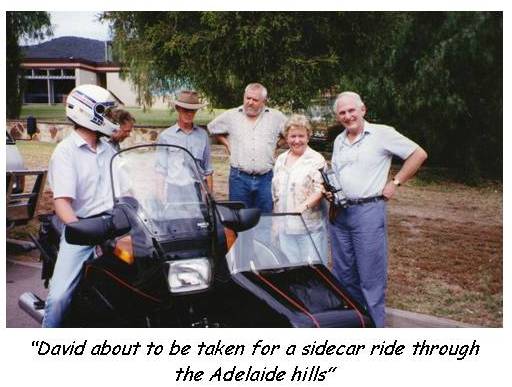 Great pomp and ceremony surrounded the extraction of AUD$20.00 from David Lamb, making him the first Rotacyclist to travel more than 20,000kms to personally pay his subscriptions!
David went on to become the second World President of the International fellowship of Motorcycling Rotarians!