Articles as the appeared in the Rotacyclists Newsletter July 1998 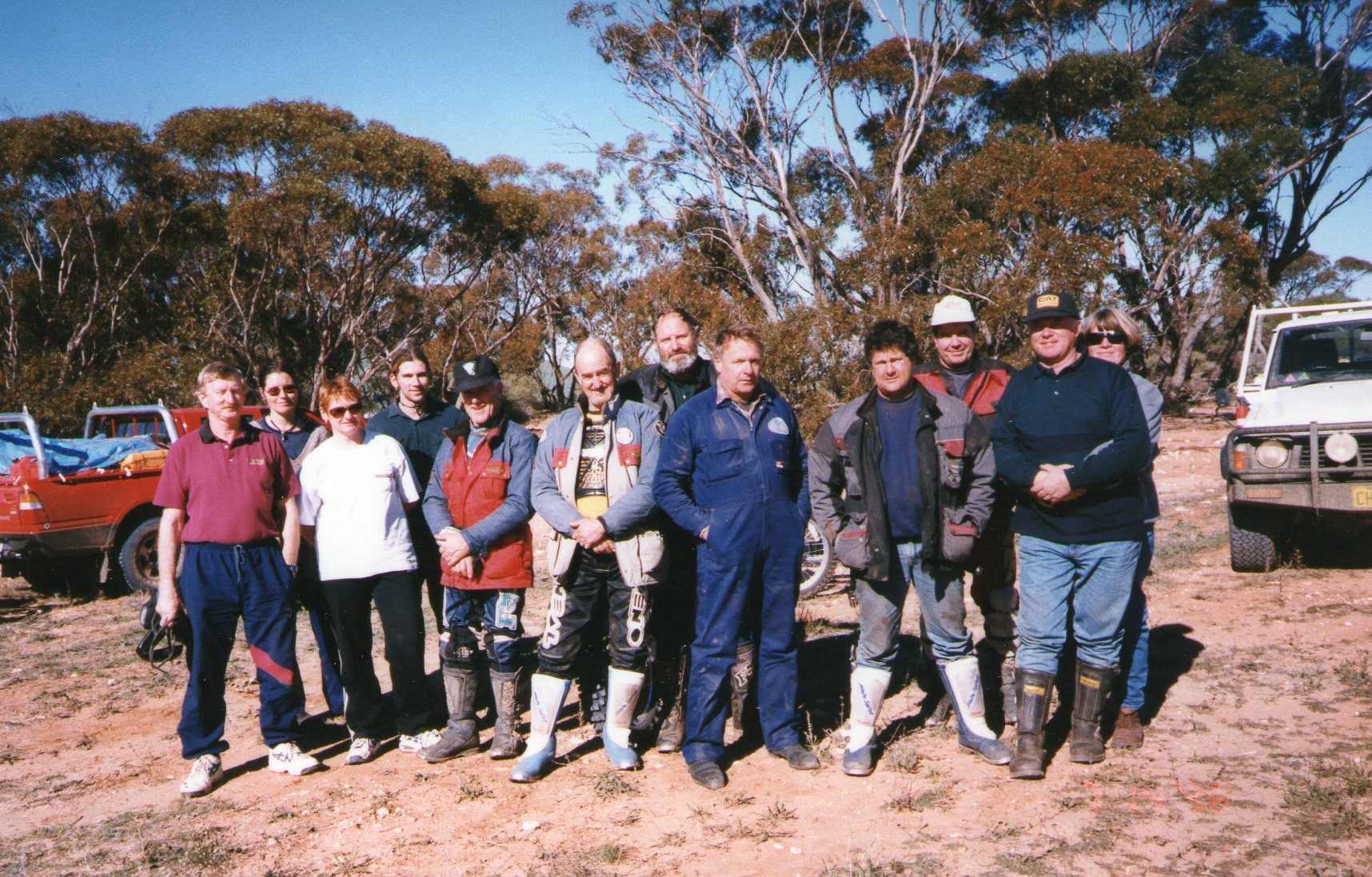 With very sketchy plans for each day's program, we left Rainbow on Day 1 for the Big Desert, 45 minutes late, due to the South Aussies working on their own time.

The vehicles headed off to the edge of the Big Desert region leading the bikes at Lake Albacutya to do some preliminary sand practice, then regrouping with the bikes at the South Eastern fringe of the South Wyperfeld wilderness Zone.

Here we travelled the Milmed Rock track to join the Murray-Nhill road, approximately 80 km from Murrayville, averaging speeds of 30 kph. General terrain was Mallee scrub and sand hills, which limited vision from track.

Points of interest along the way it included a 500 m walk to Durrell lookout and climbing the massive 3 m Melmed Rock!

Regardless of the late start, and 200 km of travelling, arrival at Pinnaroo was on time.

Some set up camp at Pinnaroo camping grounds, while others have opted for the luxurious Pinnaroo Hotel, were, that evening a surprise party was arranged by Garry's wife Julie, to celebrate his 40th birthday, with Julie and friends travelling a 10 hour round trip to help him celebrate.

Breakfast was organised at the camping ground for all.

All pumped up for from the first day's 4Wdriving, we were looking forward to another challenging day.

Leaving Pinnaroo travelling to the Victorian border, we proceeded north through the Big Desert, staying close to the fence.

This provided some of the most enjoyable driving over a large number of sand dunes with high points providing spectacular views of the countryside to the west.

This track continued to join the Sunset track through the Sunset Wilderness Zone. 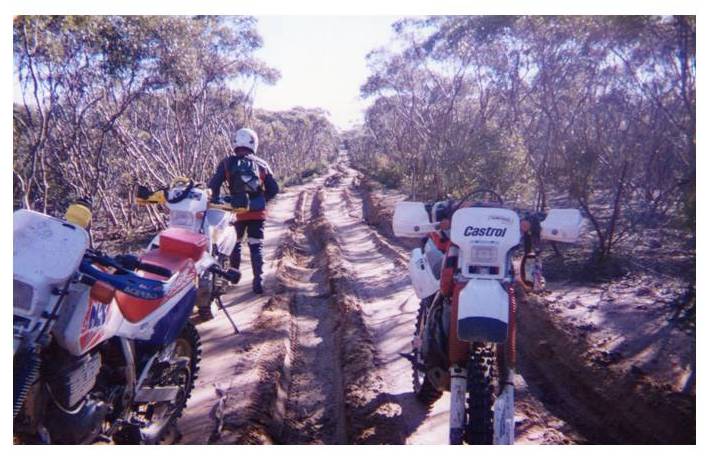 Accurate maps were a necessity to ensure regular contact with the motorcyclists, however difficulties still arose due to the large number of undocumented newly formed roads.

The Sunset track was a scenic drive over a combination of sand and boggy clay pans with a large percentage of vegetation being native pine and small mallee scrub.

Continuing on through Grub track to Pink Lakes camping ground, we experienced a very enjoyable day, a delightful contrast to the countryside we had been travelling through.

The serenity of the lakes with pink saltbush provided a delightful tranquil setting.

The camping ground, our base for two nights, was quiet and beautiful and had everybody searching for their cameras to capture the magnificent sunset across the lake.

Day three was an easier day for the motorcyclists thus leaving the 4Wdrivers to either join them or pursue their own interests.

In our case, a quick trip to Underbool to replace a 4WD tube, and in Margaret's case and unescorted trip to Rocket Lake.

However, we believe her navigational skills didn't quite get her there, but enabled her to photograph the same area several times and still have a challenging trip of 300 km!

Having a second night at Pink Lakes gave us the opportunity to stoke up the camp ovens and provide a delicious roast and damper dinner thoroughly enjoyed by all.

After many stubbies and bottles of red, the 4Wdrivers were initiated to the world of biking, when Garry proceeded to let several
scuds go - what a hoot! 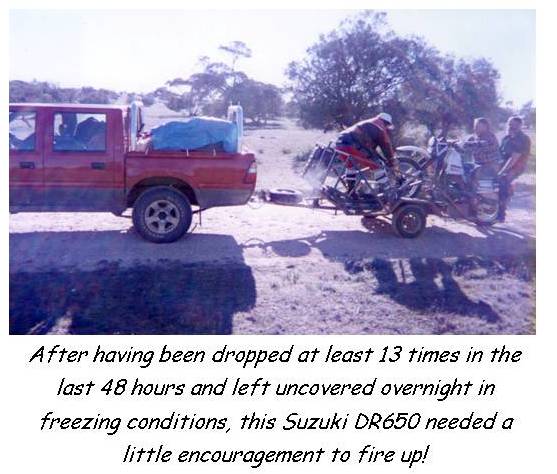 On Day 4, after a brisk walk for those awake early enough to brave the frosty conditions, camp was packed up and with sketchy directions and blind faith, we followed Margaret.

The route followed Old Grub track where we managed to get the second puncture of the trip.

Not far from here, Margaret decided to blaze a trail to meet up with the bikes.

Three quarters of an hour later we advised her to call the bikes on radio to ascertain their whereabouts.

After we were located, thanks to Keith, the trip through to Pinnaroo was fairly uneventful apart from one driver managing to widen the track by knocking off a few branches and also the excitement at seeing Margaret unable to tow the trailer up one of the sand hills without assistance.

We have several photos to record the moment which just proves that Rodeos do need 4WD!

Arriving at Pinnaroo 150 km later, some decided to opt for the luxury of a hotel once again, while others used the camping ground.

Day 5, after a basic breakfast due to the supply is being locked in the hotel carpark, we began the journey back to Rainbow.

At this stage the bike team was reduced to 3, we believe this was from the previous four days hard riding, not age!

We departed Pinnaroo several hours behind the bikes, turning off at the Murrayville/Nhill road, then meeting up with them at Chinamans Well track where we all had lunch.

Only one vehicle was able to inspect the well due to the fact that a flat tyre on the bike trailer held up the others.

A fast trip from Chinamans Well to Lake Albacutya and then on to Rainbow.

On arrival back at Rainbow, although sad to see the end of a most enjoyable five days, the anticipation of future trips made the farewells not so difficult!

Distances travelled while not relatively long, required a great deal of concentration and towards the end of the day became quite tiring.

Future trips could be arranged to ensure a satisfactory mix of scenery and off-road challenge for all participants.

We believe that the organisation of meals could be planned by the 4Wdrivers with be able assistance of the bike team at meal times.

For people contemplating similar journeys, 4Wdriving, although challenging, would not be considered too difficult for experienced drivers, but exciting for the inexperienced.

N.B. Looking forward to the destruction of a new Holden Suburban piloted by “Gung Ho” Margaret next year.

No trip will ever be complete without her. YAY!

It demonstrates the camaraderie that often develops between guys that ride together.

The Editor referred to is Tony Moyle.

Jim and Tony had ridden across the Simpson Desert the year before the Mallee Rally.

(Editor: - the first part of this article has been heavily edited in an attempt to maintain accurate reporting, continuing friendships between certain Rotacyclists, and retaliation from the Editor, who is reluctant to mention such things as motorcycle accidents, threats, dogs, thongs and written apologies in connection with the Australian Chapter’s Technical Director!)

(Jim) Not being able to participate in the 1998 Mallee Rally, I listened with interest to the tales of Crasher “This one's really gonna hurt” Moyle, and Bryant “I’m smarter than you” Chivell.

(Ed: actually the incident came about like this: After about a dozen falls by the Editor, it was very obvious to Bryant that yours truly was riding faster than my guardian angel could fly, so in a quiet voice, and in his fatherly manner he suggested that perhaps I should consider slowing down a little! Short of wind and temper, and hurting all over, and without thinking, I barked “It’s all right for you! You're smarter than I am!”) it occurred to me that the big bikes should have stayed at home, particularly when the story of Robin “don't tell them how easy it is” Smith's ride on his Suzuki DR350 came out!

(Ed: Robin came off a few times too, (as did everybody else) but even a cracked rib did not stop him from riding!)