The subject of manning and decking out this Booth was an article in the IFMR and Newsletter immediately following the 1993 convention.

The International Fellowship of Motorcycling Rotarians executive intends to again establish and man a booth in the House of Friendship at the International Convention in Taipei in 1994.

We are therefore seeking interest from those members of the IFMR who are expecting to attend the Convention to assist in the preparation of the booth and also to assist in manning the booth during the period of the Convention. It is envisaged that the display would be similar to that in Melbourne, with a motorcycle as the focal point and information material available for visiting Rotarians. Obviously simplicity in design would achieve lower establishment costs. 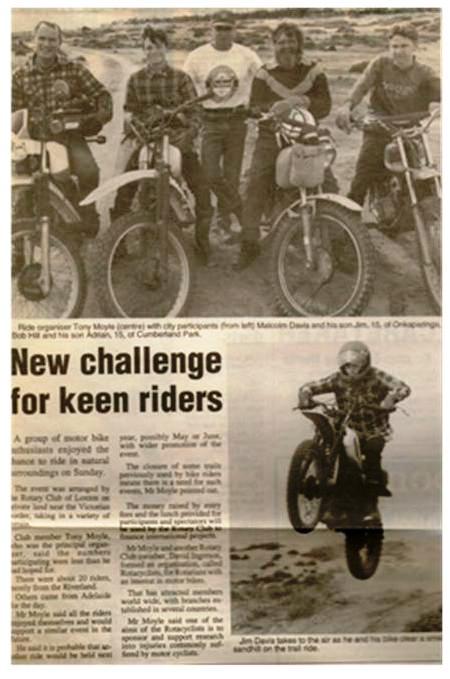 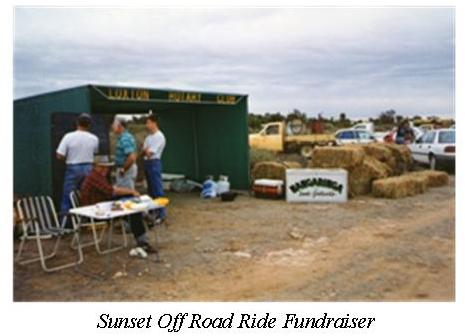 Numerous suggestions have been made for raising the funds necessary to stage a promotion of this type at the next Convention, however, we would welcome any suggestions from members. The South Australian group of the IFMR are planning an off road rally day for the keen, the amateurs and the kids, in an outback farm location.

Any funds raised will be dedicated to the convention display booth.

Members of the Rotary Club f Loxton raised a considerable amount of money by bottling wine. Well not ALL of the wine went into bottles – it was a fun day! It was a good drop and sold well!      "Click here for enlarged copy of The President's Pannier Port" 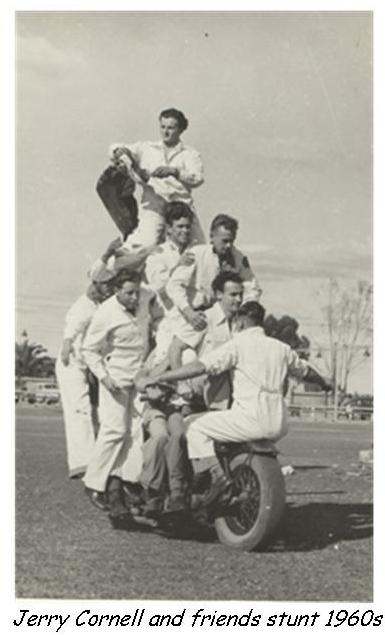 Not one IFMR member indicated that he was planning to go to the Convention in Taipei, so the IFMR executives asked if any member would like to volunteer to man the booth there. Jerry Cornell, Rotary Club of Mildura, District 9520, took up the challenge. There were a number of fundraisers to help offset some of Jerry's costs!

Our Rotary World Fellowship has been very successful, both socially and for motorcycling. I believe this is due in no uncertain manner to information booths, both at District and International levels. The booths are basically meeting places for talking to fellow bikers, discussing the Fellowship, handing out pamphlets and nomination forms and generally recruiting new members.

We like to have an interesting bike on the stand because no keen motorcyclist can resist stopping and inspecting the beautiful machine displayed.

Our best promotion was at the World Rotary Conference held in Melbourne in 1993. The highlight was transporting World Rotary President Cliff Dochterman from the Trade Centre to the conference at the Tennis Centre. The parade consisted of two police motorcyclists, Cliff in a motorcycle and sidecar, followed by an escort of 10 Rotacyclists and a police car. What a wonderful sight and much appreciated by Cliff himself even though we used two “tyre levers” to fit him into the sidecar.

I would recommend members to sit on booths because you meet so many different people. I met one fellow from Ballarat, Australia who had purchased a 1947 Triumph new and still uses it for picnics with his wife.

Our next major promotion was in Taipei, Taiwan at the World Conference1994.

Taipei is like another world, very heavily populated with over 24 million people and 2.2 5 million motor scooters. Each set of traffic lights was like the start of a large motorcycle race.

The trip was not without its problems, despite the pre-planning by David and Tony. After many flight and hotel changes I at last settled in. On my arrival at the airport ( over two hours late) and another traumatic 2 hour bus ride, I arrived at my hotel, a magnificent Eastern Temple design (called the “Grand”) where the service and hospitality were equal to the name “Grand”. Unfortunately from my hotel it was a torrid, terrorising and traumatic 2 hour ride to the World Trade Centre. I actually spent 4 to 5 hours daily travelling on buses and taxis.

The House of Friendship, as I said, was at the World Trade Centre, a massive building about the size of a soccer field, with about 11 or 12 stories high of trade offices surrounding the auditorium were the friendship area, food kiosks, hundreds of tables and chairs - a stage for the presentation of Eastern dances and singing plus our Rotary Fellowship stands. 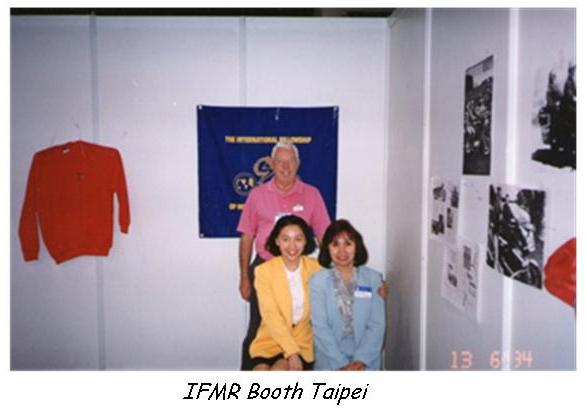 In addition there was a magnificent display of locally manufactured products, cars, bikes, clothing, furniture, electronics and sporting goods.

Adjacent to the above were about 20 friendship stands, including ours, and soon we were speaking to other Rotarians from around the world. Several of the stands were manned by Americans and fellow Australians. It was pleasant to be among people with whom you could converse.

Until this time we were unregistered, but on the second day I found my papers to be “Jerry Cornell – America”, instead of Australia. Our stand proved to be very popular with many Rotarians interested in in our Fellowship. Some were already members and to others I explained the purpose of the Fellowship, handing out membership forms and if possible giving the name of a member living near to the enquirer.

I heard of many enjoyable motorcycle trips from around the world and requested that they forward reports to our Editor for others to enjoy. I spoke to Bill Davies who organise the trip across America by the 12 Welsh Rotacyclists. I also met Cliff Dochterman and showed him a photo of himself in the sidecar. He thought he looked like baby while. He also stated that no way was I going to get him on one of those local motor scooters, but thanked us for our hospitality while he was in Melbourne. 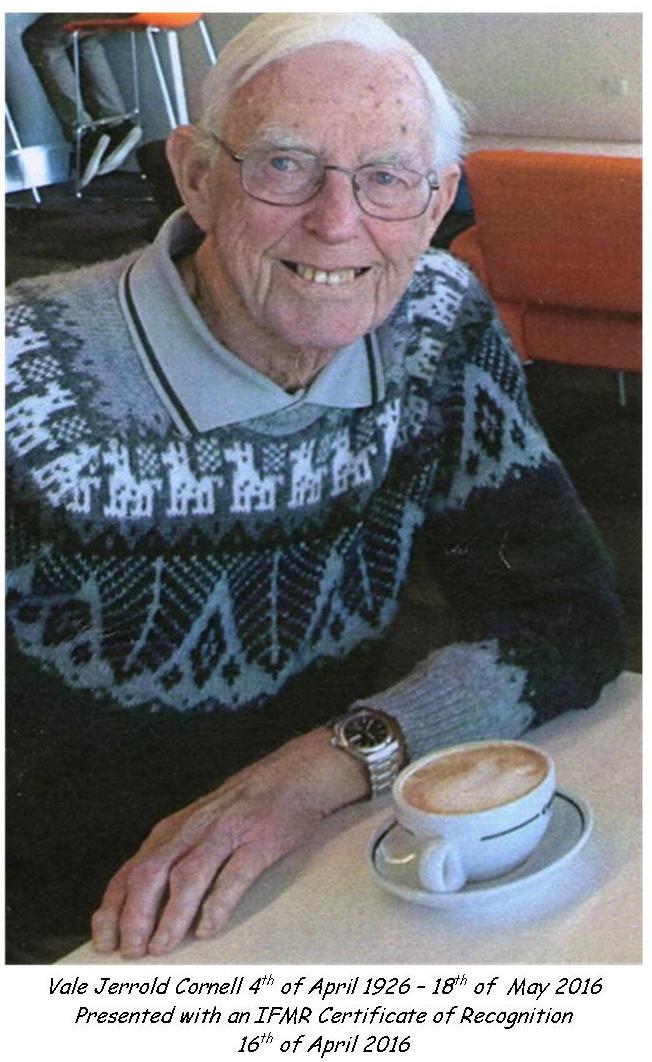 I attended the Task Force meeting and spent an enjoyable couple of hours discussing the future of Rotary Fellowships world wide and was very pleased to hear that our IFMR had the highest growth rate for 1993 - 94.

I can assure you all that the International Fellowship of Motorcycling Rotarians is here to stay and eat each individual member contributes to even the smallest amount, both he himself and all of us will continue to enjoy this Fellowship.”

Jerry Cornell, at the age of 66, was one of the first Rotarians to join the IFMR in early 1992.

His motorcycling days were long behind him. You have just read how involved with the IFMR Jerry was!

Up until a few years prior to his passing, he never missed an AGM, a Meet and Greet or a Fundraiser. Jerry often found the weakest of excuses to visit the friends he’d made through the Fellowship. He home hosted a number of international Rotacyclists and promoted the IFMR at District conferences.  Jerry was a regular contributor to IFMR Newsletters!

He drove his Holden Commodore up the Birdsville Track to attend the World President’s Banquet.

Jerry was a non-riding (or so his wife Thea thought) member of the 1996 IFMR Alpine Tour through the Alps of Austria, Germany, Switzerland and Italy.

Jerry was a Life Member of the Olympic Park Speedway by the time he joined the IFMR.