When it was decided by the Executive of the Motorcyclists Fellowship to conduct a ride as part of the Rotary International Convention, held in Melbourne, Australia in May, the organisation of the ride quite naturally fell to the Victorian members of the Fellowship. For overseas members information, Victoria is the Australian State in which Melbourne is the capital city. As Melbourne is situated on Port Phillip Bay, the shoreline of which traverses about 250 kilommeters, that Big Bay Ride seemed appropriate, and so it was planned for Thursday, 27 May.

As even the most fervent motorcyclist rarely brings his motorcycle to an International Convention, arrangements were made for interested visitors to hire bikes from local suppliers and the leading Melbourne distributor Peter Stevens loaned a new Triumph and the Harley for the occasion.

Such was the informality of the occasion that come the morning of the riot we were still not sure how many bikes would turn up at the rendezvous point, Batman Park at the appointed time of 9:30am.

To our great delight 20 Rotacyclists turned up, including a couple of wives riding pillion plus a police escort of two of Melbourne's finest! As the schedule was reasonably tight the group set off on time and headed for Sorrento where they were to embark upon the vehicular ferry for transfer across the bay to Queenscliff for lunch. While the convoy was noted to be riding to a timetable at the first stop of Frankston, their arrival at Sorrento and it was only 2 minutes before the ferry departure time, causing some confusion to the control car that had gone ahead to confirm the ferry booking. Even though they had been cutting it fine, the leader of the ride had decided to take an alternative route via Arthur’s Seat, a popular Melbourne spot that affords the best use of Port Phillip. The 20 minute ferry ride allowed plenty of time to discuss the quality of the bikes and the great “skill” shown by all in the ascent and descent of the hairpins at Arthur’s Seat. 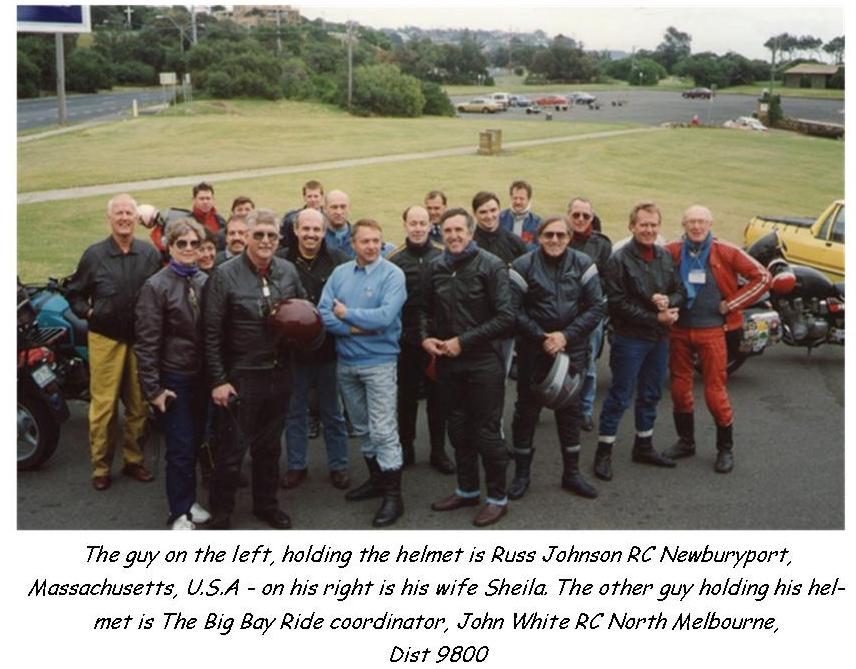 The Ozone Hotel at Queenscliff is something of a landmark, ideally his suited by the sea, just a place for the mid-week tourist to go for a day trip and a quiet meal. The few other diners must have been at least mildly surprised at the arrival of around 25 animated “bikers” in one group. After a pleasant lunch with a few formalities, the group adjourned to the reserve opposite. Bikes were parked and

those that want to tested the qualities of the new Triumph so kindly provided by Peter Stevens.

In no time at all it was time to take the road back to Melbourne via Geelong (around 120 km) thus completing the Big Bay Ride of 250 km for the day. Chairman David Ingerson and Secretary Tony Moyle heading in the other direction to make the 800 km ride back to Loxton. All arrived safely at their destinations and hopefully all participants, whether local, interstate or overseas, can look back on the day with pleasure.