Their “mission”, to cross the largest parallel sand dune desert in the world, (150,000 Sq. Klm.)  from West to East. One back-up vehicle and two motorcycles did not start with a group, because of mechanical breakdown, but were to join it the convoy several days later.

The first leg of the journey was an opportunity for the riders and drivers to get to know their vehicles and practice wheel changing and puncture repair skills! The gibber roads are not kind to pneumatic tyres! Our camp this night was William Creek Pub & Caravan Park. An interesting place to say the least. How many outback pubs have a swimming pool with “Guard Pigs”? Savage, we think!

Day Two, saw more gibber road with a lunch stop at the Pink Roadhouse, Oodnadatta, and the last opportunity to top up our fuel and repair/replace tyres & tubes, before we cross the Desert. We had been on the road less than one minute after our lunch stop, when in the middle of absolutely nowhere, two Police Officers stopped our cavalcade and breathalysed us all! No .05’s! 107 km north of Oodnadatta, we made camp at Hamilton Station. No showers, No toilets, No water! The girls are not impressed, but realised that’s the way it's going to be for the next few days. 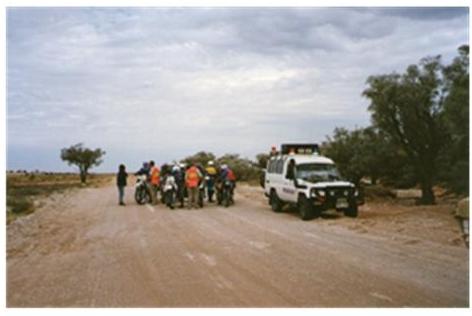 Day Three, We turn right on the Pedirka Track and travel 60 kms to the ruins of Dalhousie Homestead. The track is not maintained and has river crossings, sandy sections and stony tablelands. A lot more interesting than the Oodnadatta Track. Another 10 km past the ruins we reach the Dalhousie Springs, a very welcome oasis, where we would all take the opportunity to soak in the warm water of this lovely area. Unfortunately, we did not have the time to inspect the many springs in this area. On our way to our overnight stop at the Purni Bore, we spent a few moments to inspect Freeth Junction, a large clay-pan where the tracks from Dalhousie and Macumber join the French Line. This track is the result of the French Petroleum Company geological survey. It is a straight line to Poeppel Corner, where the Northern Territory, Queensland and South Australia borders meet, 220 miles East. 15 kms past Freeth Junction, we set up camp at Purni Bore. In 1964, the French Petroleum Co. put down an exploration well, 1870 metres deep, which resulted in a lot of hot water, over 60 degrees Celsius. Some of which supplies a very civilised shower, and was followed by great food and fellowship. 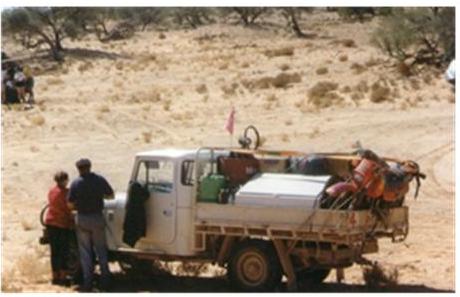 Day Four, 30 Kms on, we stop where the Rig Road meets the French Line. All the vehicles reduced their tyre pressure, from now on, the sand can be quite deep and dunes start to be a lot more of a challenge. Some of our riders are having a lot of trouble with these conditions and elected to have their bikes loaded onto our 4 wheel drives. The bikes on average are covering about 60 kms per hour, so we find it better to ride for 30 minutes, then wait for the slower bikes and backup vehicles.

Day Five, They say, there are 1,100 sand dunes to cross, when you do the Simpson. I did not personally count them, but it felt like at least, that many. It was hard work but a lot of fun. We made camp a few Kms past Poeppel Corner. 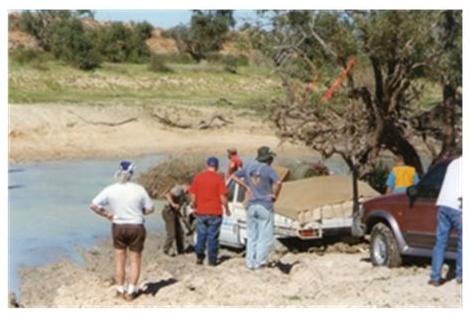 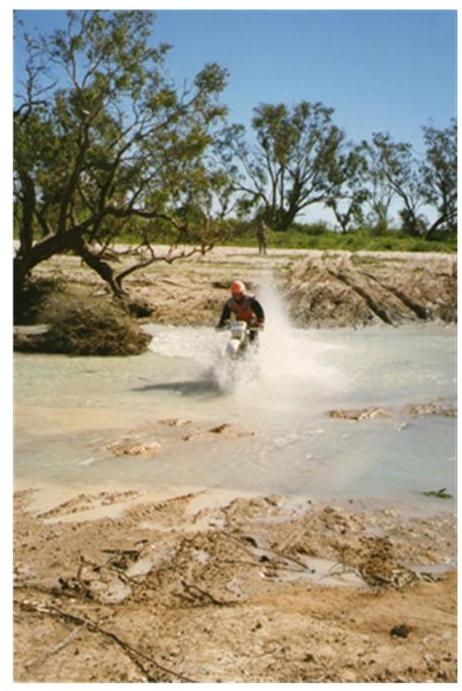 Because of a better than average wet, the floodway both sides of the creek were covered with grasses and acres of wildflowers amongst Coolibah trees. The creek could not be crossed at this point, so we had to take a 20 km detour south. The bikes had no trouble getting across, one bike however, attacked the opposite bank a little too fast, got slightly airborne and made a very uncomfortable 20 point landing. Result, 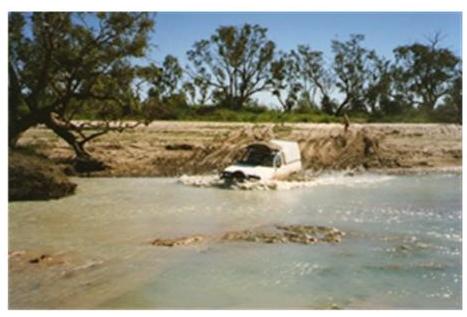 broken finger and a few more bruises. The 4x4 drivers after having witnessed the lead vehicle sink to its axles, chose another line and all got through to the accompaniment of much laughter, cheering and some not too helpful suggestions. Another 23 km and we arrived at “Big Red”.
The largest of the sand dunes in the Simpson. Rising 40 m. There are alternative tracts but it would appear everybody wants to have a go at scaling Big Red. In the heat of the afternoon the sand was soft and deep, but this did not stop any of the bikes. 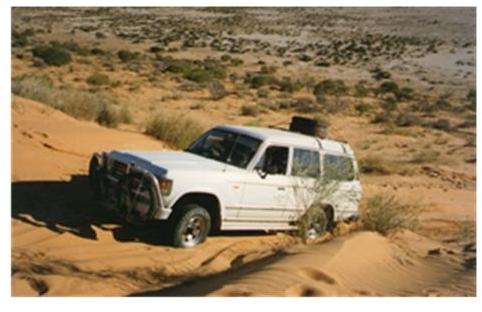 The 4x4's on the other hand, had a lot of trouble and only some made it.

Once on the other side of this last dune, we made camp and got ready for our 33 km run into Birdsville the following morning.

Day Seven, Mixed feelings. It was good to see Birdsville, have a one at the pub and a hot shower at the Caravan Park. The downside was, we had crossed the Simpson and are now heading home.

The rest of the day, was spent servicing the bikes, sorting our gear and getting ready for 140 + sit down dinner. This would probably be the most unique Rotary Meeting ever. The Rotary Club of Loxton celebrated “Rotary in the Outback” with the International Fellowship of Motorcycling Rotarians Sand Dragon Ride and the World President’s Banquet. Rotarians were making up from United Kingdom, Netherlands and all over Australia. It was a great night of fellowship!

Day Eight, Saw us cover 308 km through the Sturt Stony Desert & Strezlecki Track with some gibber, which claimed a few more tyres. Camp tonight is at Mungerannie, which offers fuel, food, drink and camping. Our campsite is on the edge of the Mungerannie waterhole, which is fed by an artesian bore.

Day Nine, 211 kms Down the Birdsville Track saw us back at our starting point, Marree. A couple of hours after our arrival most of the convoy had sorted out their loads, collected their vehicles, trailers & loaded their bikes.

Most of the women had not driven in sand before and having experienced this together, did a great job, and had a lot of fun, & special bonds had been formed, so some serious emotional farewells ensued. (It wasn't only the female gender with tears in their eyes either!)

A fantastic experience it was had by everyone.

Historian’s note: The names of the 47 participants, the vehicles they drove, and where they lived, are recorded in the “World President’s Banquet, Birdsville” chapter. 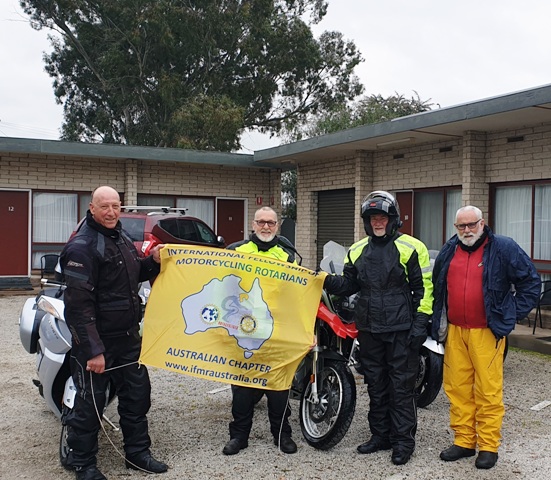 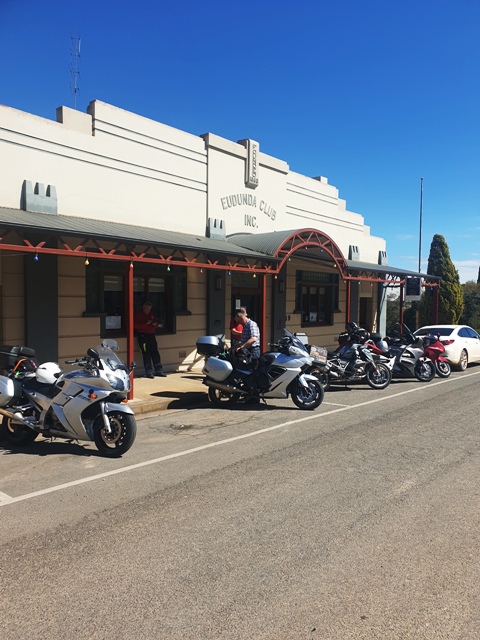 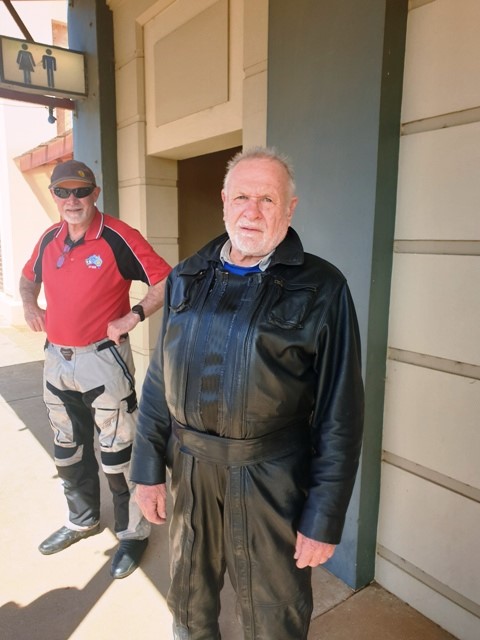 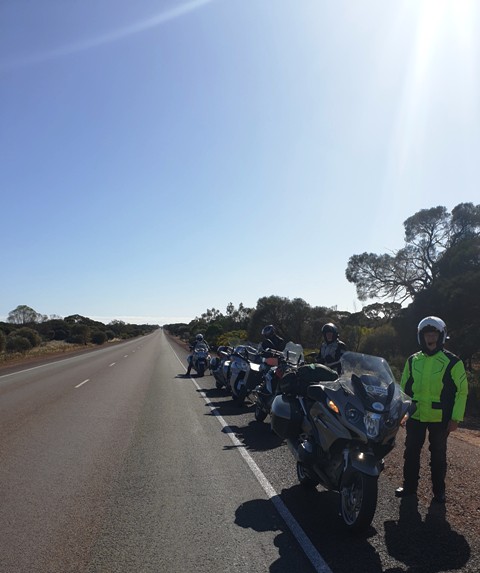 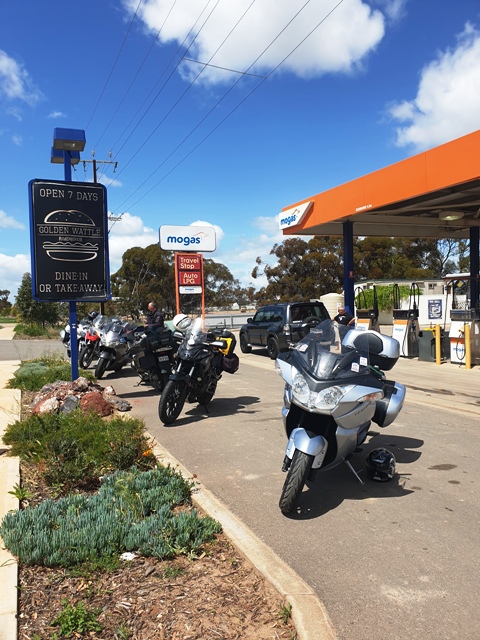 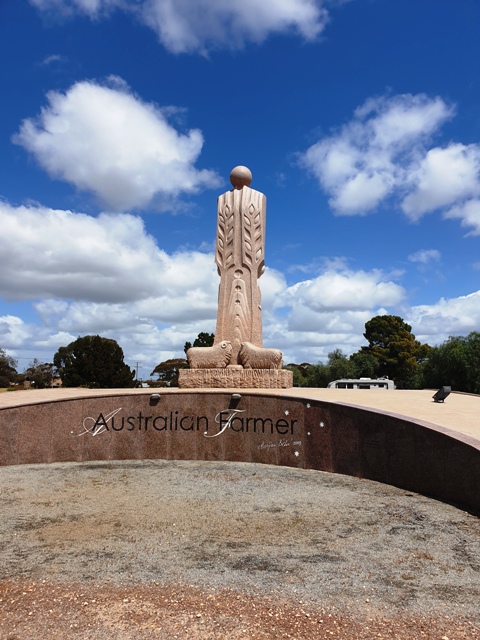 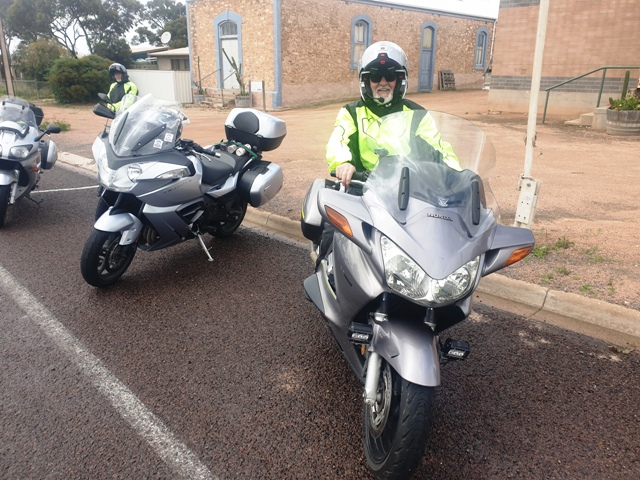 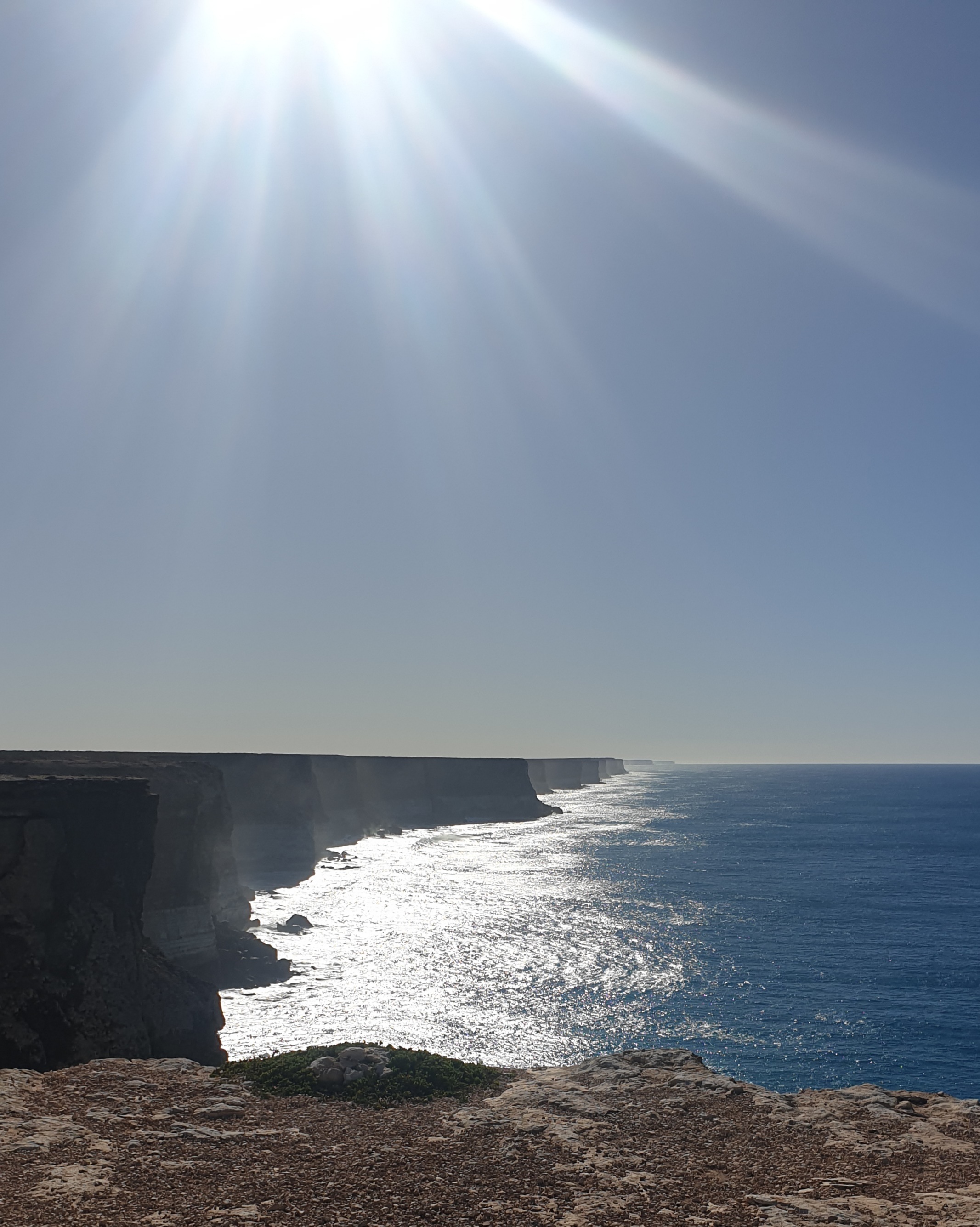 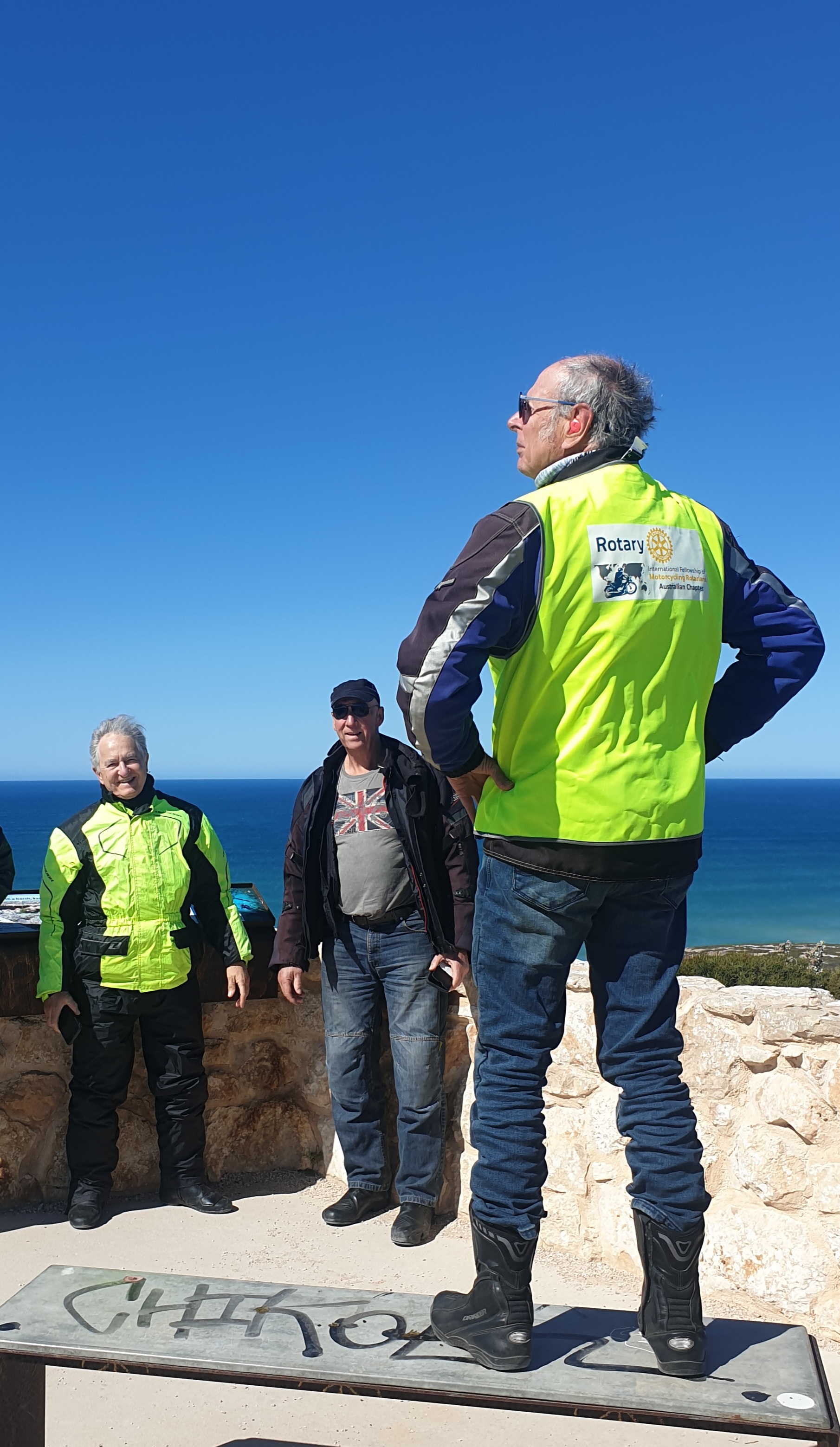 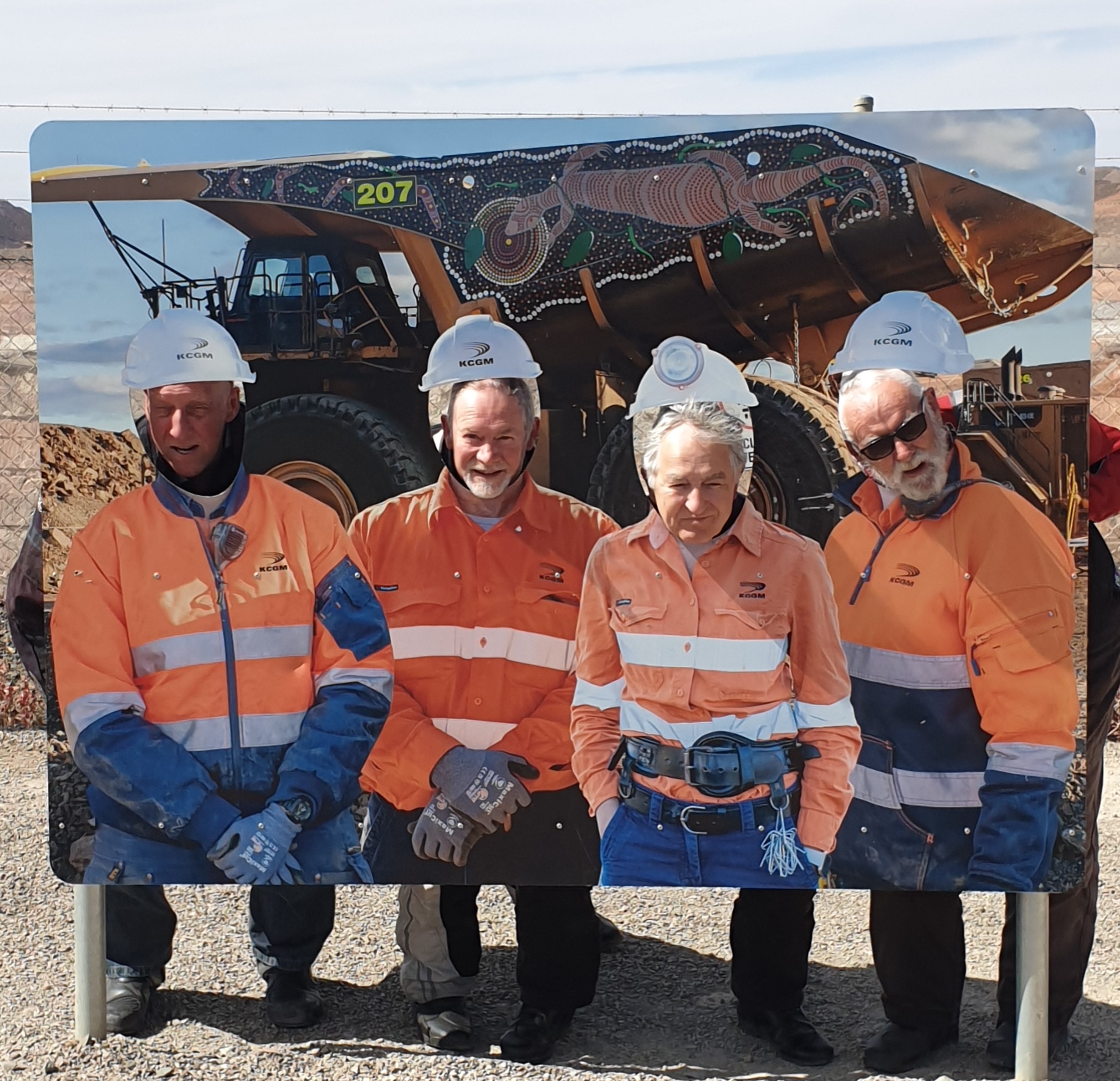 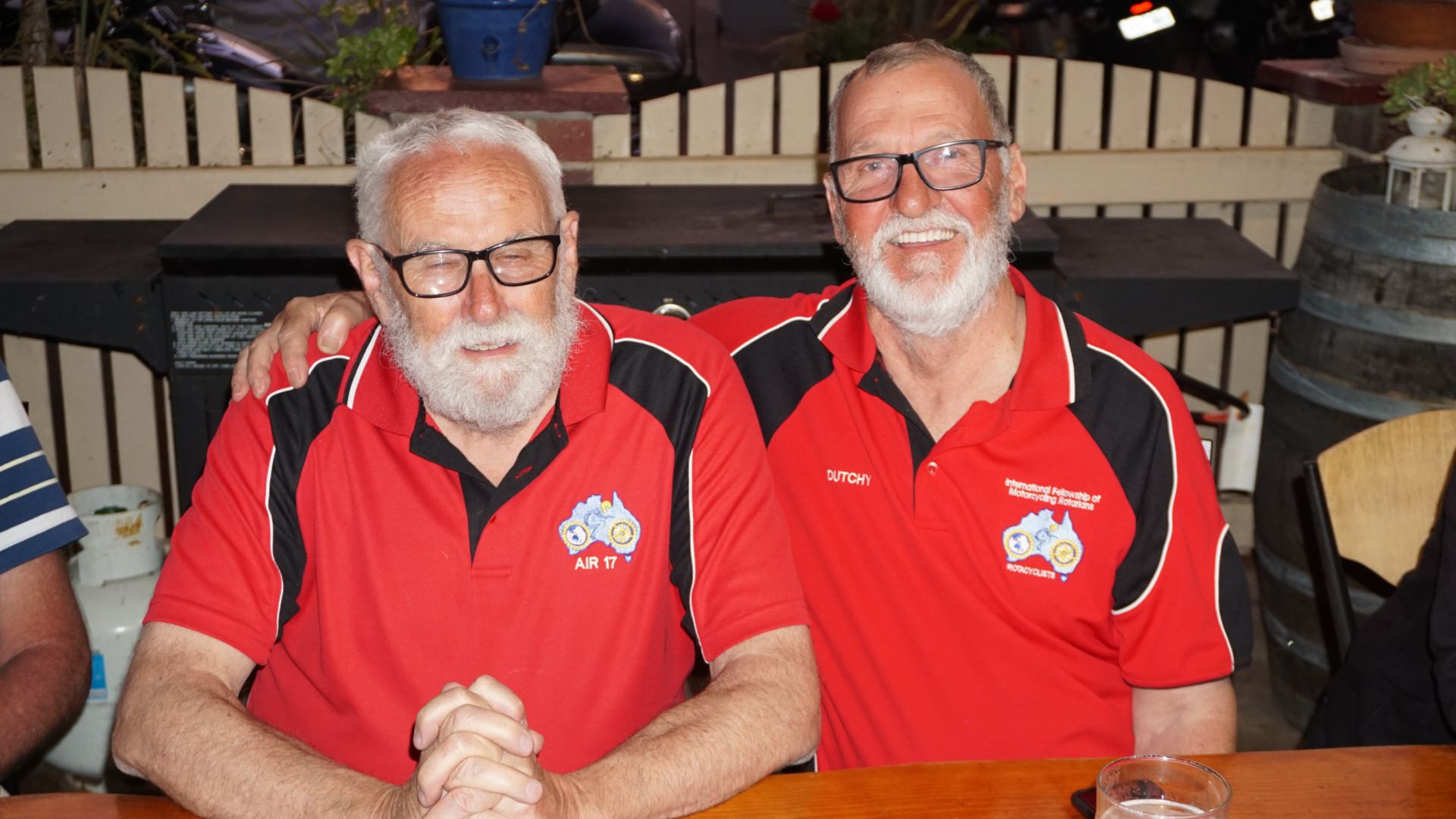 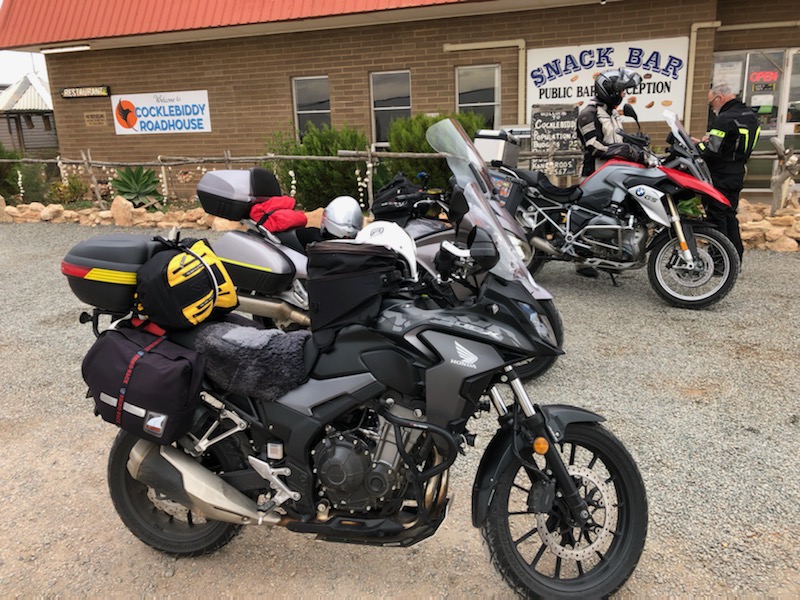 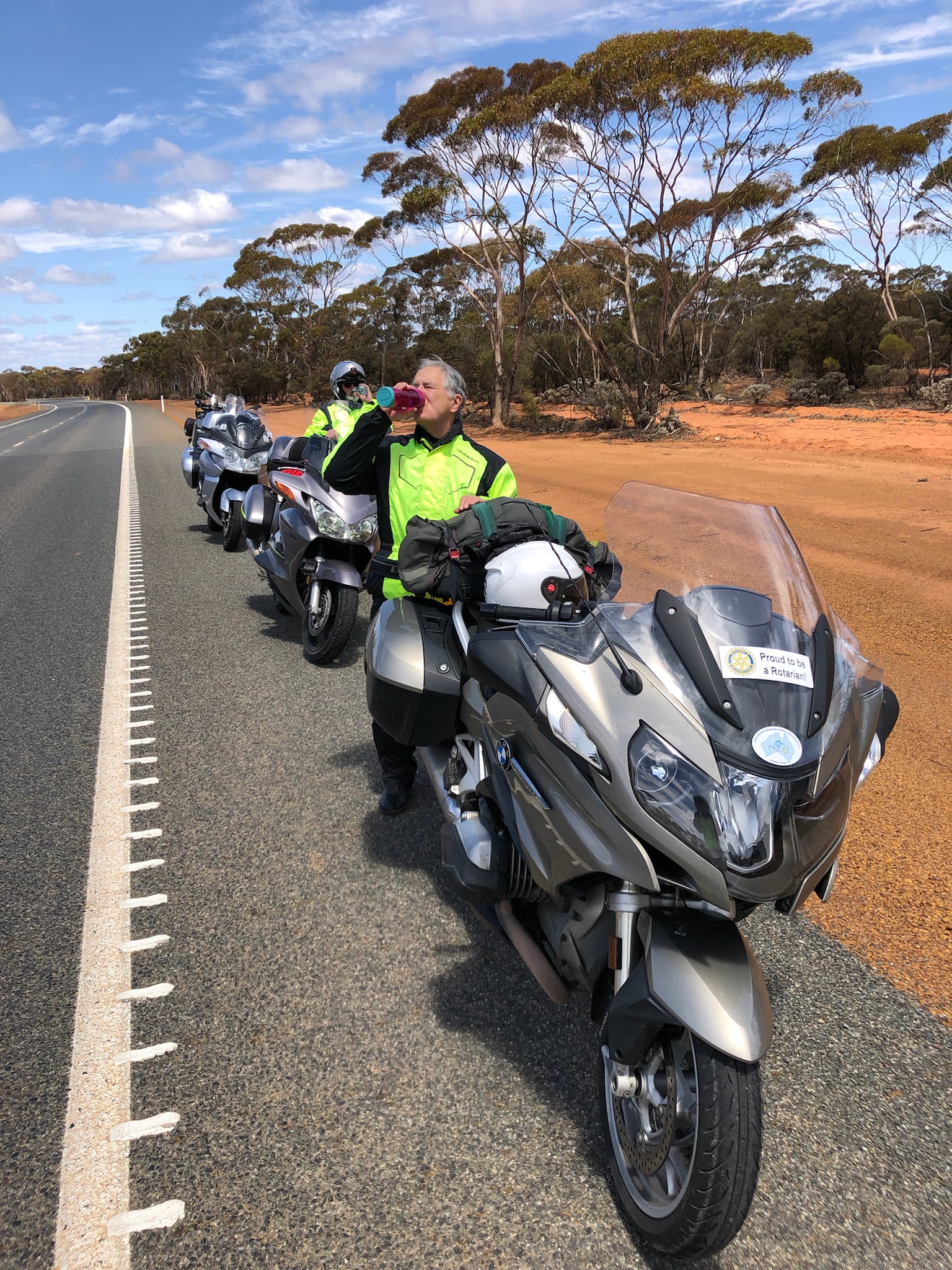 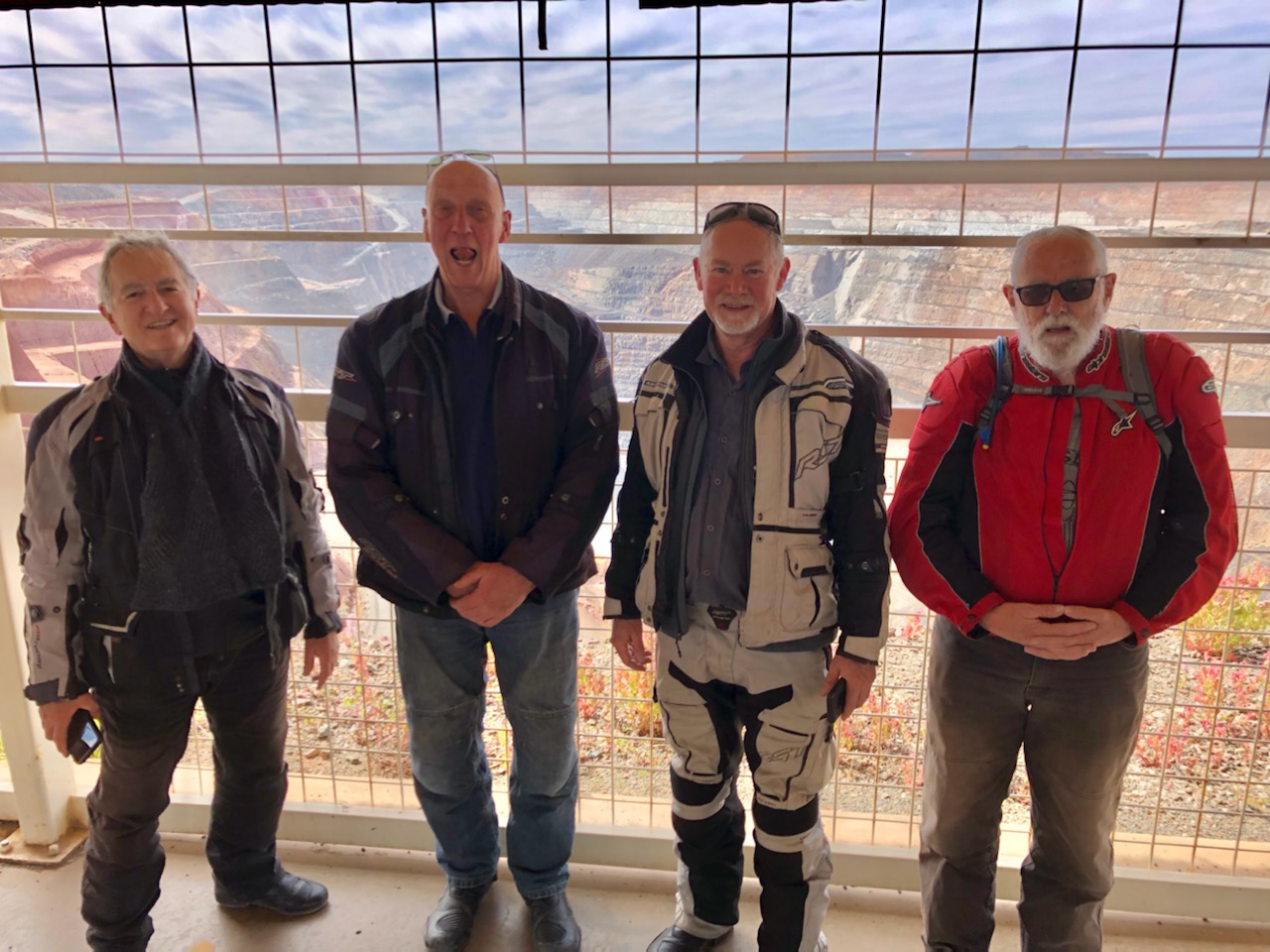 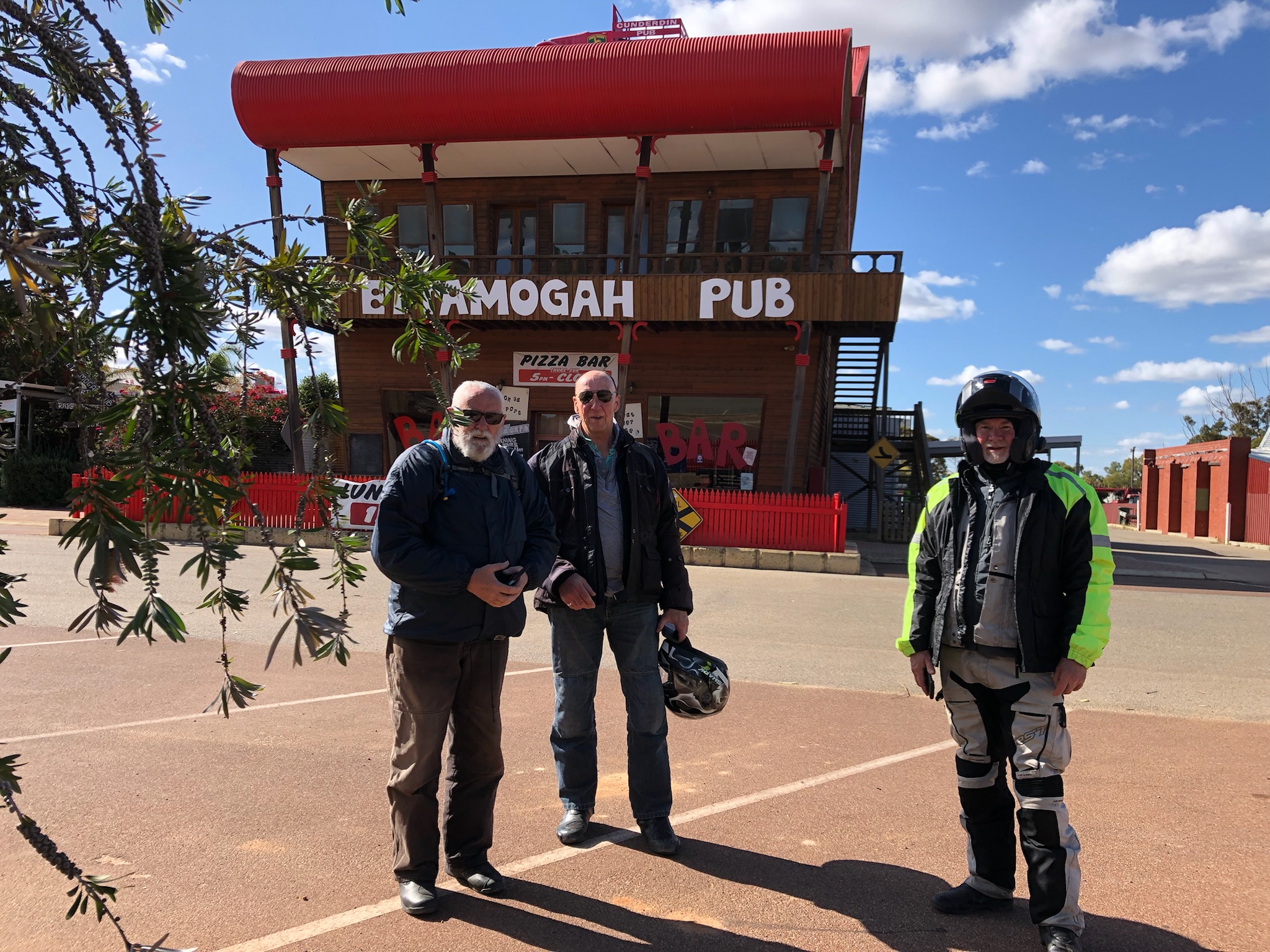 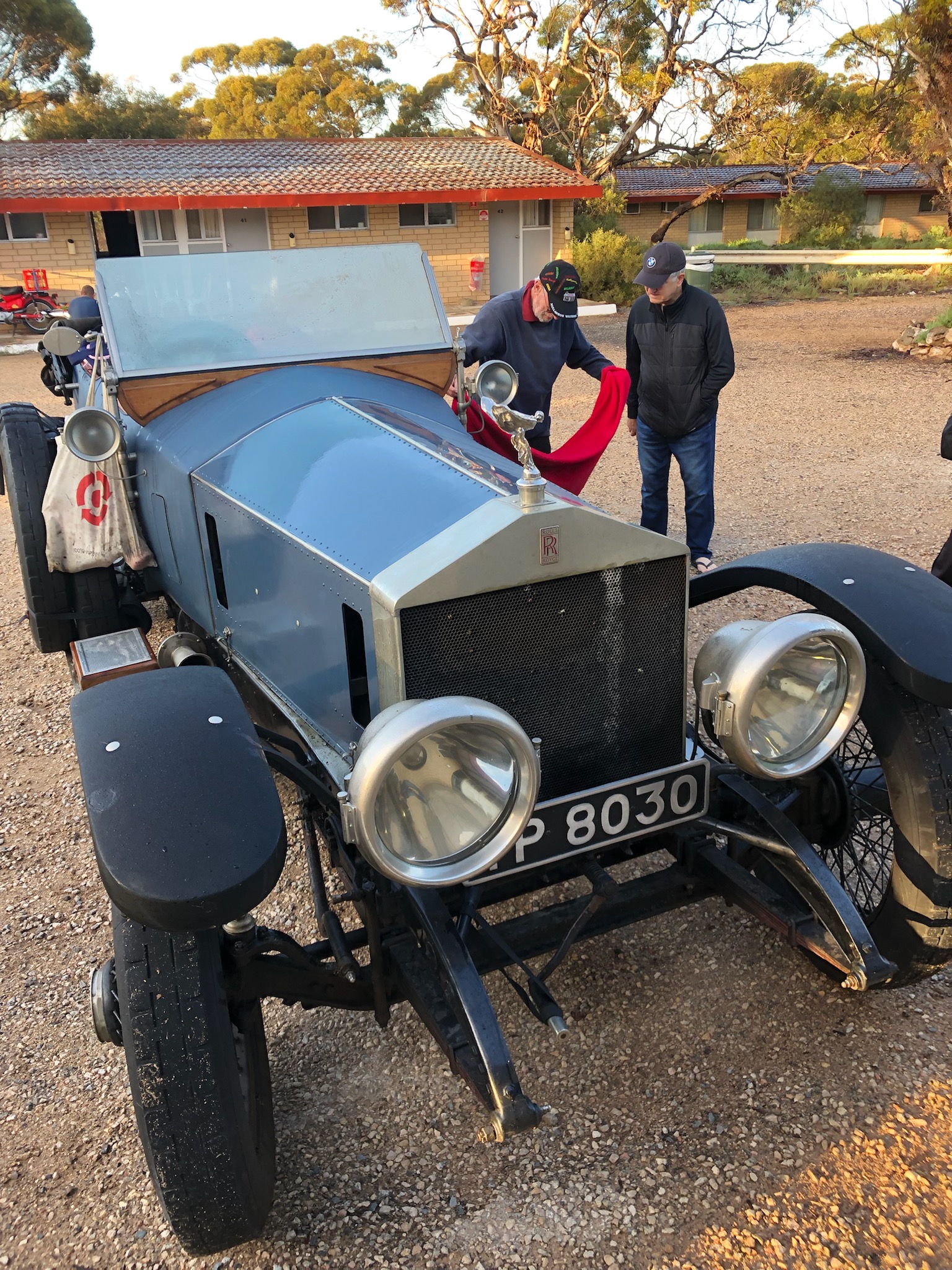 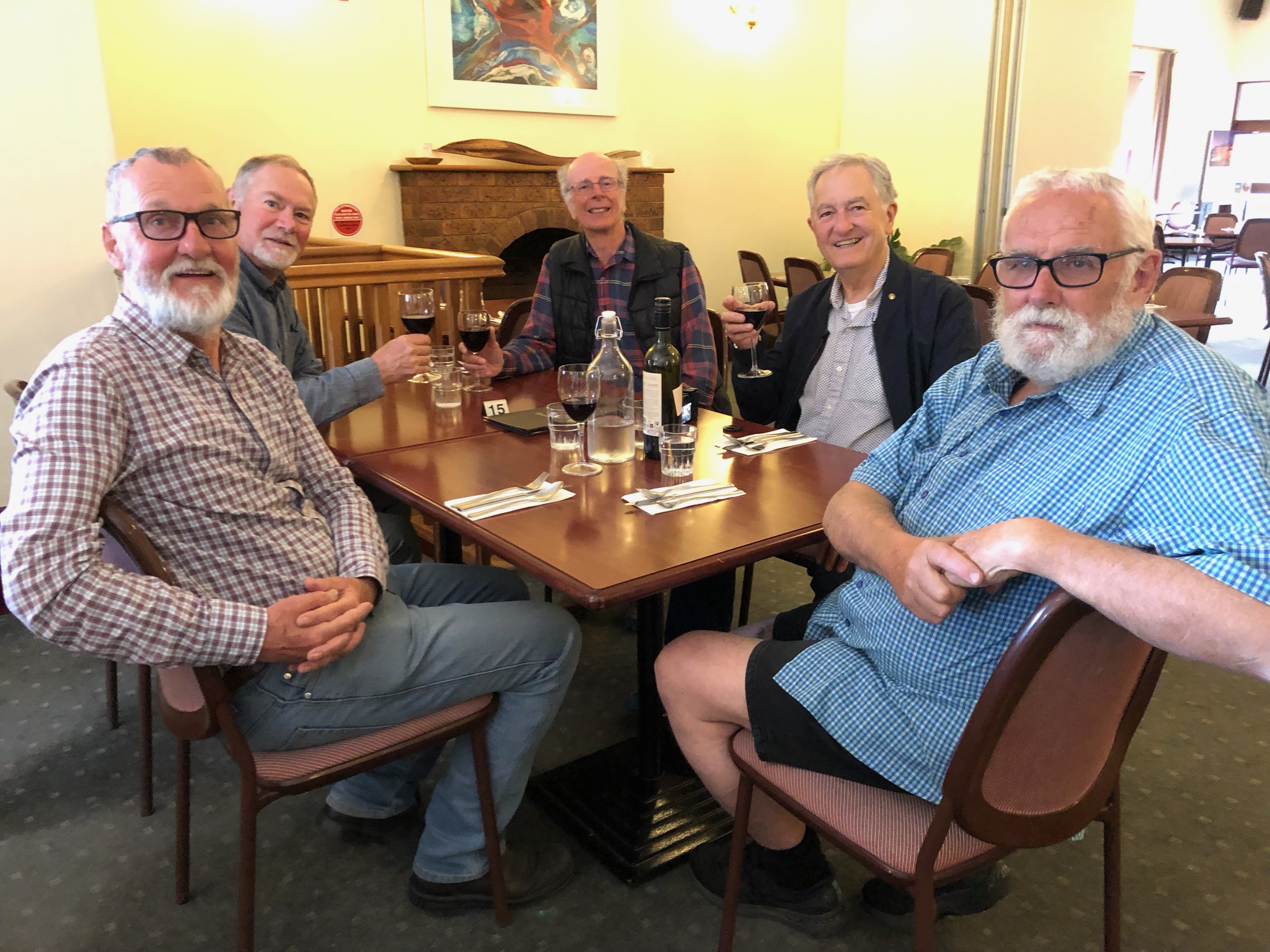