The first IFMR Newsletter Editor was Rotarian George Sinclair, Charter Member of the Rotary Club of Adelaide Parks, District 9500. George’s sense of humour had many members eagerly awaiting the next issue.

The first of many Newsletters was printed in early-1992. Each Newsletter included the current Executive and their contact details, a “Rotacycle Round-up” by Chairman, David Ingerson, member’s contributions, technical information, IFMR apparel, and a dose of good humour. 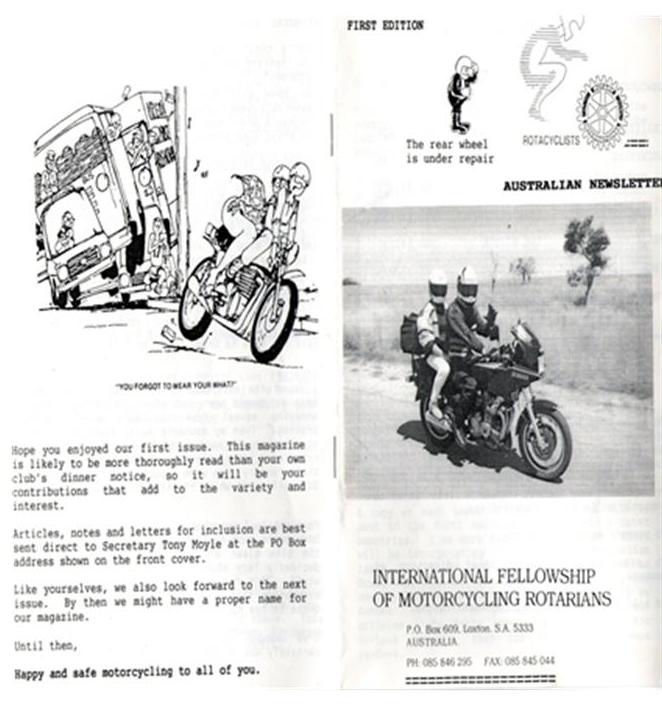 Right from the very beginning, Rotacyclists were keen to contribute, with David L. Powel from Jackson, California being the first overseas member to have his contribution published. A great little story by the 72 year old, describing his two small Hondas. His closing line was “My wife won’t go near either of them.”

The second Newsletter was released just a few weeks after the first, advertising the first ever IFMR Ride and Gathering in Australia.


A story by Rtn Allen King, from Calgary, Canada, made page 8, and Donald L. Young of Greenfields USA, also got a write up!

George would print out a master copy and mail it to Secretary Tony Moyle in Loxton, who would have updated the ever growing IFMR Membership Directory. Someone, or some local business, would be conned into doing the printing. The December 1993 Newsletter and the Membership Directory entailed printing 2,280 A4 sheets on both sides.

Members of the Rotary Club of Loxton, would stay on after the meeting and circle a long table on which piles of printed sheets, in numerical sequence would be stacked, and group them so they could be stapled together, then folded and squeezed into envelopes.

There would be at least two Rotarians, hunched over, copying names and addresses from Membership Directories onto the envelopes.

The odd jug of beer would be consumed during this process.

Add to this the cost of postage, and you will get an idea of the effort and costs that were put by Loxton Rotarians promoting this Fellowship.