WELL, WHAT AN EXCELLENT WEEKEND!!

Our first Australian Rotacyclist get together took place on the weekend of the 17th and 18th of October at Loxton.

The gathering place was the Katatapko Lodge, a hostel type accommodation adjacent to the caravan park overlooking the mighty River Murray. The Lodge, now operated by the Loxton caravan park authority, was in fact initiated by the Loxton Rotary Club and built over a period of two years by the club and many assisting organisations and individuals. It made an excellent venue for our first Rotacyclist function.

Among the Rotacyclists present were Bob Tate, a veterinary surgeon and member of the Alexander Rotary Club in Victoria. Bob had ridden about 800 km (50 miles) to attend. Also travelling over 800 km was Des Watts, a watchmaker and member of Forbes Rotary Club in New South Wales. 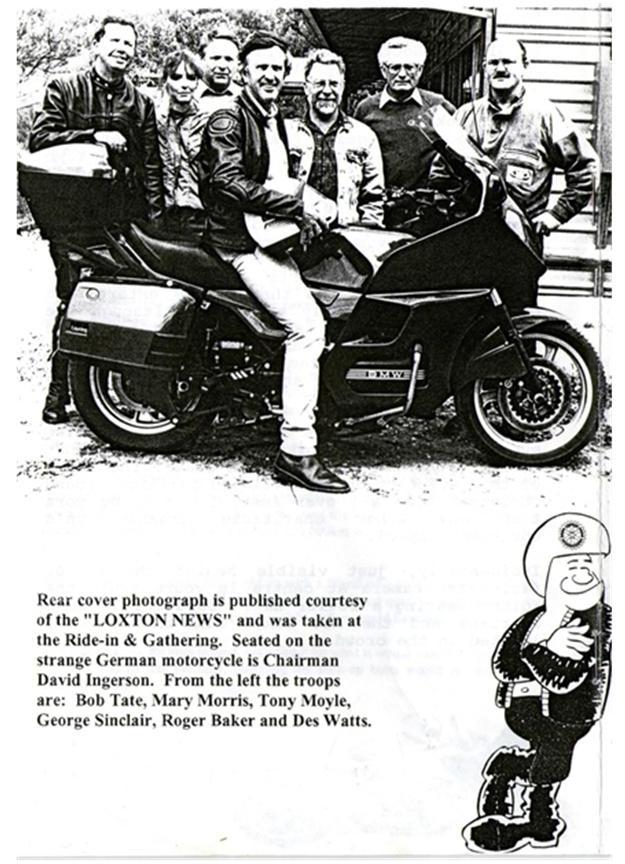 From about 250 km away came George Sinclair, your newsletter editor, medical scientist and member of Adelaide Parks Rotary, and also John Donaldson, a plumber of Campbelltown Rotary Club in metropolitan Adelaide. Also in attendance was Mary Morris, our first lady Rotacyclist, partner of Rotarian Tony Moyle. Mary came along on her massive BMW.

Roger Baker and his wife Lorraine came over from Broken Hill. We found out over the weekend that Roger has never forgiven Lorraine for giving his 1952 Gold Flash to the milkman, back in 1958, as payment for their milk bill. Just imagine how much milk a good condition Gold Flash could be traded for today!

We also found out that Des Watts has been on several FAIM projects in the Pacific area.

Numbers swelled during the Saturday as more Rotacyclists arrived. David Fisher, our Technical Director came up from Tailem Bend accompanied by the President of Tailem Bend Rotary Club, Robin Hood (without his arrows). Then the other local Rotacyclists, along with their wives and other Loxton Rotarians started to arrive to prepare for the evening function.

Paul Pfitzner had been there for most of the day, quietly sitting in a shady corner preparing the barbecue and roast. Neil Schlein took several groups of guests for a spin up and down the river in his most powerful speedboat. We really ought to take up a collection to help Neil buy a windscreen for his toy, it was windier on his boat than a motorbike.

The evening started with a formal meeting of Loxton Rotary Club, a superb meal prepared by the ladies (and of course Paul), followed by motorcycling videos. These included some classic footage taken in various parts of South Australia in the late 1920s and early 30s. We then had a general meeting of Rotarcyclists to discuss future plans.

Sunday morning we had photographs taken by the local press before taking a circuitous trip to Berri, stopping briefly at Lock 4 on the Murray and then a cross river trip on the Berri Murray ferry (punt).

We visited a car and motorbike Museum at the Big Orange tourist stop. Some interesting vehicles there, mainly vintage and elderly cars with a sprinkling of bikes. The bikes included a 1955 Adler twin, a ‘55 James 150, and the bike which started the trend for multi cylinder moderns, the K1 750 cc Honda 4.

Time was running out for the Interstate guests so instead of the planned BBQ, we had lunch at a roadhouse before scattering in all directions for home.

On behalf of the visiting Rotacyclists we would like to thank Raylene and Paul Pfitzner, Judy and David Ingerson and all of the Loxton Rotarians and wives who worked so hard to make this a most memorable weekend for the first Australian Chapter Gathering.

Best wishes and good health to everyone. Let’s do it again soon.