Excellent fellowship was enjoyed by about 80 Rotacyclists from around Australia and about a half a dozen overseas members. Included in the guests were the two police motorcycle riders who had escorted the RI presidential cavalcade from the Convention Centre to the Tennis Centre. These two gentlemen were accompanied by their wives. 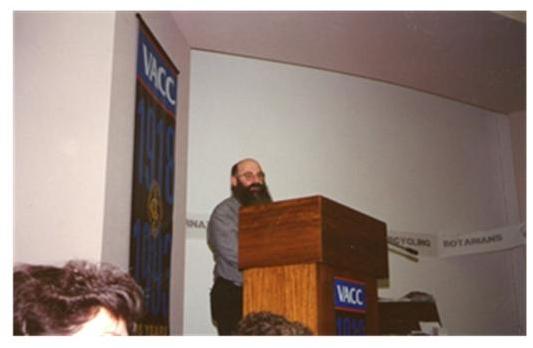 Guest Speaker for the night was Peter Smith, better known as Mr. Smith, Editor of Streetbike magazine and a regular contributor to other Australian magazines such as Two Wheels.

His talk on the future of Australian motorcycling, and also the need to recruit more long bikers on to the roads, a humorous and entertaining, as well as being right to the point. Peter said he needed a few glasses of red wine to stop fainting during his speech, and a few more glasses of red to stop him fainting afterwards. I think Peter would make an excellent wasrel son for any of the Barossa Valley winemakers.

His fellow journalists from AMCN and other magazines had quite a job leaving the meeting. Peter was quite happy to stay and socialise as long as we all were still some bottles of red which had not been emptied. Peter's good nature was solidly demonstrated by his refused to accept any fee for his time and effort to join our gathering. This alone made it possible to donate just over $500 raised at the meeting to the Royal Prince Alfred Hospital in Sydney for its accident research unit.

Many motorcycling items were auctioned off during the meeting, including some factory Harley-Davidson gear donated by the Rotary District Governor of the Milwaukee area.